Amy Lynn Hartzler (née Lee; born December 13, 1981), known professionally as Amy Lee, is an American singer, songwriter, and pianist. She is the co-founder and lead vocalist of the rock band Evanescence. Along with her contributions with the band, Lee has also participated on other musical projects including Walt Disney Records' Nightmare Revisited and Muppets: The Green Album.

She has performed collaborations with artists such as Korn, Seether, and David Hodges. Lee composed the soundtrack to the films War Story (2014) and Indigo Grey: The Passage (2015) with cellist Dave Eggar, and the song "Speak to Me" for the film Voice from the Stone (2017). She possesses a mezzo-soprano vocal range.

Lee received the Songwriter Icon Award from the National Music Publishers Association in 2008. In 2012, she won Best Vocalist at the Revolver Golden Gods Awards and was also named Rock Goddess of the Year at the Loudwire Music Awards.

She was awarded Best Film Score by the Moondance International Film Festival for Indigo Grey: The Passage in 2015. Lee is also the American chairperson for the international epilepsy awareness foundation Out of the Shadows. 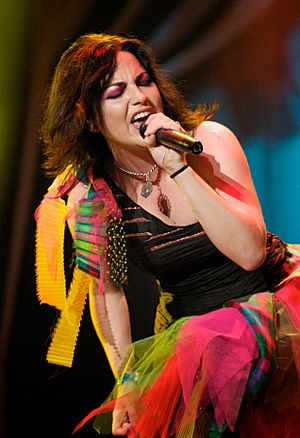 Amy Lee of Evanescence at the Maquinária Festival, Brazil 2009

Lee's family moved to many places, including West Palm Beach, Florida, and Rockford, Illinois, and eventually settled in Little Rock, Arkansas, where Evanescence was formed. Lee graduated from Pulaski Academy, a private school in Little Rock, in 2000. She briefly attended Middle Tennessee State University in 2000 to study music theory and composition but dropped out to focus on Evanescence.

The first songs she remembered writing were called "Eternity of the Remorse" and "A Single Tear", the first was written when she was eleven years old and wanted to become a classical composer, and the second was for an assignment when she was in the eighth grade.

Lee has cited influences ranging from composers such as Mozart and Danny Elfman, to artists like Björk, Tori Amos, Plumb and Shirley Manson. 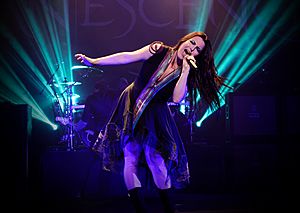 Evanescence performing at The Wiltern Theater in Los Angeles 2015

Lee has a recognizable fashion style, marked by her occasional use of gothic make-up and taste for Victorian-styled clothing. She has been labelled as a gothic rock superstar. 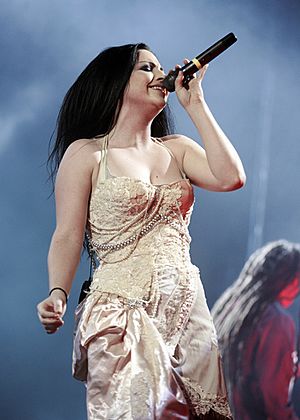 She also designs many of her own clothes. In an interview explained her fashion style, commenting that she would rather make her own clothes because it is hard to find what she exactly wants elsewhere, she explained that her on-stage wardrobe was meant to preserve the atmosphere of the songs and complete the image.

Her most well-known on-stage style is often characterized by boots, a simple black tank top, a long skirt and various ornaments and accessories. However, while touring in promotion of Synthesis, she wore long dresses like of ball gowns.

Lee was in a relationship with the lead singer Shaun Morgan from the band Seether from 2003 to 2005. In 2007 Josh Hartzler, a therapist and long-time friend, proposed to her, the couple married on May 6, 2007, and honeymooned near The Bahamas. Lee announced via social media on January 18, 2014, that she was pregnant. The couple's first child in 2014.

All content from Kiddle encyclopedia articles (including the article images and facts) can be freely used under Attribution-ShareAlike license, unless stated otherwise. Cite this article:
Amy Lee Facts for Kids. Kiddle Encyclopedia.