Andrés Calamaro (Andrés Calamaro Massel, August 22, 1961), is an Argentine musician, composer and Latin Grammy winner. His former band Los Rodríguez was a major success in Spain and throughout Latin America mainly during the 1990s. He is multi-instrumentalist and became one of the main icons of Argentine rock, selling over 1.3 million records to date.

Andres Calamaro was born in Buenos Aires. At 17 years of age he participated as a guest in the recording of an album of the group Raíces, and shortly after he started his own band, the Elmer Band, with guitarist friend Gringui Herrera. This band had an underground hit, Tristeza de la Ciudad (City Blues).

When Miguel Abuelo, leader of Los Abuelos de la Nada, returned to Argentina, he reunited the band and invited Calamaro to play keyboards. The band was a big success; Calamaro wrote some of their greatest hits, such as Sin gamulán, Mil horas and Costumbres argentinas. 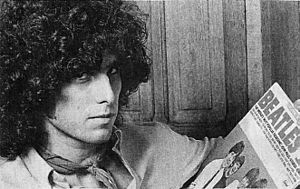 Before the dissolution of Los Abuelos de la Nada, Calamaro released his first solo album, Hotel Calamaro in 1984. A second album, Vida Cruel, recorded shortly after his separation from the band, was received warmly by the press but did not achieve commercial success.

After a third album, Por Mirarte (1988), Calamaro started producing for bands such as Los Fabulosos Cadillacs, Los Enanitos Verdes and soloists such as Fabiana Cantilo.

Calamaro closed the 1980s with his own band, featuring old friends Gringui Herrera and Ariel Rot, who recently came back from Spain. The trio recorded the album Nadie sale vivo de aquí (No One Gets Out of Here Alive) in 1989 with a number of guest musicians, which obtained the nomination of Best Record of the Year.

Due to the economic situation in Argentina, Calamaro and Rot settled in Spain, where they created the band Los Rodríguez with Julián Infante and Germán Villela on drums. The band didn't have a bass player, but Guillermo Martin, Candi Avello, and later Daniel Zamora accompanied the band in recordings and tours.

Sin documentos gave them international acclaim, with its mixture of Rock, Flamenco and Latin American rhythms. They toured Spain and Latin America, and entered the history of Rock in Spanish.

Andrés Calamaro released Grabaciones Encontradas ("Found recordings" which in Spanish could also be understood as "Conflicting Recordings") while working with Los Rodríguez. After Palabras más, palabras menos, the band released a "Greatest Hits" album, which sold nicely, and then dissolved.

In 1996, Calamaro performed "Cosas Que Me Ayudan A Olvidar (Things That Help Me To Forget)" for the AIDS benefit album Silencio=Muerte: Red Hot + Latin produced by the Red Hot Organization. In 1997 Calamaro recorded Alta suciedad (literally "High Filth," but also a pun "High Society"/"Alta Sociedad"), which sold over half a million copies and took him again touring around Latin America.

Calamaro began composing song after song. In six months, he had over 100 songs ready to be released. Thirty seven of these found their way to his next album, Honestidad brutal. The album included hits such as: Te quiero igual, Paloma, Los aviones, Cuando te conocí and La parte de adelante. This double CD was created after the breakup with his girlfriend, which reflected in the songs. The album also contains a collaboration with Diego Maradona.

In the following years, Calamaro made many guest appearances in concerts and recordings. He posted unpublished songs from 2001-2002 for free download over the Internet, saying that "Music belongs to those who want to hear it; and to nobody else".

He also made his home recordings available online. Due to the low quality of the recordings, and with permission of the author Camisetas Para Todos, a group of fans, re-mastered Calamaro's songs and made them available on their site. He also started Radio Salmón Vaticano, a virtual recording studio at his web site.

In 2004 he released El Cantante (The Singer), an album with covers of Tangos and other Latin American rhythms, and a few of his web released songs.

In 2005 he released El Regreso (The Return), a compilation of the live recordings from his appearance in the Luna Park Stadium earlier that year. The disc was presented on December 17 to an audience of 20,000 in the Obras Sanitarias Stadium, and was awarded with the 2006 Gardel Award for Rock album by Male Artist and Best Album Cover. Calamaro was awarded the Golden Gardel (main award).

After that, he released Tinta Roja, a collection of classic Tangos as El día que me quieras, Como dos extraños or Sur. On November 20 of 2006 was released El Palacio de las Flores, recorded with Litto Nebbia and on September 11 of 2007, La Lengua Popular comes to light. In 2008 Raíces 30 Años followed with the band Raíces, and in 2009 Andrés, a solo-anthology of 6 CDs.

In June 2010 he released his album "On The Rock", an album which returned to his more rock-oriented sound. The album became an instant hit as well as the first single "Los Divinos" a song about the passing of time.

All content from Kiddle encyclopedia articles (including the article images and facts) can be freely used under Attribution-ShareAlike license, unless stated otherwise. Cite this article:
Andrés Calamaro Facts for Kids. Kiddle Encyclopedia.