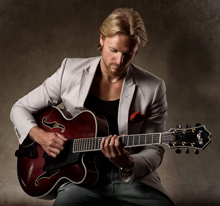 Öberg was born in Stockholm on 6 August 1978. When he was seven, he took classical guitar lessons at school. He played electric guitar when he was twelve years old under the influence of a teacher who played blues and jazz fusion. He studied at the Royal College of Music in Stockholm.

He began his professional career at eighteen when he worked with Viktoria Tolstoy and Svante Thuresson. In 2006, he signed with Resonance Records. He described his music at this time as a combination of jazz, funk, soul, Latin, and Brazilian music. He recorded with the Resonance Big Band on an album that received a Grammy Award nomination for Best Instrumental Arrangement. In 2009 he started a web site, Andreas' Guitar Universe, where he teaches online classes. He has worked with Barbara Hendricks, Hank Jones, Les Paul, Eros Ramazzotti, and Toots Thielemans.

Oberg was hired to write a song for a commercial that appeared on Swedish television. Since then he has composed for Universal Music. He wrote a song with Andreas Carlsson, who encouraged him to write lyrics in addition to music. As a songwriter Oberg has collaborated with Melanie Fontana and Ludwig Goransson. He has written and produced pop music for the Swedish, American, and Japanese markets.

In 2015 SHINee's album, Odd (including "Romance", co-written by Öberg), topped the Korean Gaon album chart for two consecutive weeks and the Billboard World Albums chart at the end of May 2015.

In May 2016, Namie Amuro released her single "Mint" where both the A- and B-sides ("Mint" and "Chit Chat") were co-written and co-produced by Oberg. The song sold more the 250,000 digital copies in Japan and was certified Platinum. In June 2016, EXO released their album EX'ACT, which included "Stronger", cowritten by Oberg. The album was the most sold in the world according to Global Album chart and has sold more than one million physical copies.

Öberg won the Hagström Guitar Award and the Gevalia Music Prize in 2004 and the International Guitar Competition Prize in Montreux in 2006. He taught classes at the Musicians Institute in Hollywood.

All content from Kiddle encyclopedia articles (including the article images and facts) can be freely used under Attribution-ShareAlike license, unless stated otherwise. Cite this article:
Andreas Öberg Facts for Kids. Kiddle Encyclopedia.