Andrew Porter (July 10, 1820 – January 3, 1872) was an American army officer who was a brigadier general in the Union Army during the American Civil War. He was an important staff officer under George B. McClellan during the 1862 Peninsula Campaign, serving as the Provost Marshal of the Army of the Potomac.

He was a grandson of Revolutionary War officer Andrew Porter and a second cousin of Mary Todd Lincoln. His younger first cousin, Horace Porter (1837–1921), also served as a Union general and later as the U.S. Ambassador to France. He attended the United States Military Academy at West Point, New York, for six months in 1836 and 1837.

He served in the Mexican–American War as a first lieutenant in the 1st Mounted Rifles. Within a year, he was promoted to captain and cited for gallantry, being brevetted two grades to lieutenant colonel. Porter spent the next fourteen years serving at various posts and forts on the frontier. He fought a duel in Texas with future Confederate general James J. Archer, whose second was Thomas J. Jackson, later "Stonewall" Jackson. 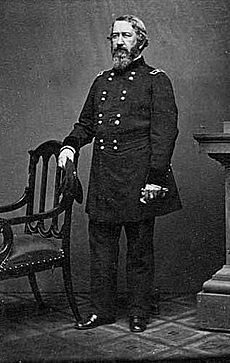 On the outbreak of the Civil War he was serving as a colonel of the 16th U.S. Infantry. He was appointed as a brigadier general in May 1861, and commanded the 1st Brigade, 2nd Division at First Battle of Bull Run. He served as Provost Marshal of the District of Columbia, and was then appointed as Provost Marshal General of the Army of the Potomac in the Peninsula Campaign. In April 1864 he mustered out for health reasons.

A photo of Porter by Mathew Brady circa 1862 survives.

Porter married Margaretta Falconer (Margarite) Biddle (1825–1913) of the Biddle family. She was the daughter of John Biddle (1792–1859), a military officer and Michigan politician. Her nephew was John Biddle (1859–1936), who became Superintendent of the United States Military Academy. Together, they were the parents of John Biddle Porter (1858–1915).

Porter moved to Paris, France, in an attempt to improve his health. However, he died at his home there in 1872, and his remains were returned to the United States for burial in Elmwood Cemetery in Detroit, Michigan.

Reflecting a post-Civil War pattern of naming many Washington, DC streets in newly developed areas in the Capital after Union generals, an east-west street in the Northwest quadrant is named Porter Street, NW.

All content from Kiddle encyclopedia articles (including the article images and facts) can be freely used under Attribution-ShareAlike license, unless stated otherwise. Cite this article:
Andrew Porter (Civil War general) Facts for Kids. Kiddle Encyclopedia.