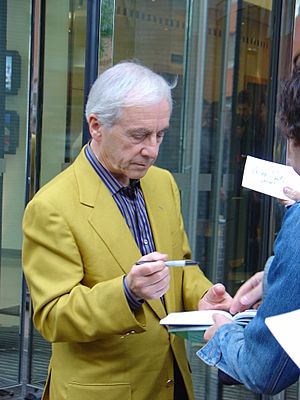 Sachs was born in Berlin. His family was Jewish. In 1938, they left Germany for London, shortly after Adolf Hitler became Germany's leader.

Sachs is best known for his role as Manuel on Fawlty Towers. He also played Albert Einstein in a 1996 episode of Nova on PBS, and provided all the voices in the English version of the 1994 movie version of Faust.

Sachs died on 23 November 2016 at a nursing home in Northwood, London from vascular dementia, aged 86.

All content from Kiddle encyclopedia articles (including the article images and facts) can be freely used under Attribution-ShareAlike license, unless stated otherwise. Cite this article:
Andrew Sachs Facts for Kids. Kiddle Encyclopedia.