Antares is a village and census designated place (CDP) in Mohave County, Arizona, United States. The CDP encompasses 0.65 square mile of land, and is at 3,556 feet elevation above sea level. It exists on part of U.S. Route 66.

A passing freight train in 2019

Antares is along Route 66, which is the main road of the village. The BNSF Railway runs parallel to Route 66.

An unpaved side road called Antares Road and described as "fine for all vehicles" also runs through the Hualapai Valley. Antares Road is a county road. It runs from Route 66 heading roughly northwest until it meets Pierce Ferry Road, giving access to Meadview, Arizona and the Colorado River at Lake Mead. The U.S. Geological Survey says that "Antares Road is unpaved for 31 of the 32 miles; however, Mohave County does maintain the road to a native material standard." Antares Road is designated County Highway 149, and after the intersection at Pierce Ferry Road it continues as County Highway 139/Gregg's Hideout Road.

The part of Route 66 that runs through the village is a long curve. This curve, known as Antares Point, is the longest continuous curve on any United States Highway, running for about 2 mi (3.2 km). 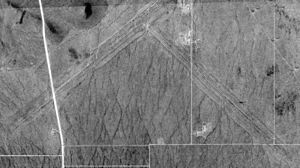 An aerial photograph of the Hackberry airfield in 1993; Antares Road is visible on the left.

All content from Kiddle encyclopedia articles (including the article images and facts) can be freely used under Attribution-ShareAlike license, unless stated otherwise. Cite this article:
Antares, Arizona Facts for Kids. Kiddle Encyclopedia.