Argiope keyserlingi is a species of orb-web spider found on the east coast of Australia, from central New South Wales to northern Queensland. It is very similar in appearance to a closely related North-Queensland species, Argiope aetherea. A. keyserlingi is commonly found in large populations in suburban parks and gardens, particularly among the leaves of the Lomandra longifolia. Like many species of orb-web spider, A. keyserlingi shows considerable sexual size dimorphism, as the females are many times larger than the males. Mature females can be seen during the summer months and it is not uncommon to see multiple males on the web of one female.

A. keyserlingi is commonly known as the St. Andrew's cross spider, due to the construction of bands of silk forming the arms of an X-shaped cross, similar to the one upon which St. Andrew is traditionally said to have been crucified. Juveniles of this species sometimes build a spiral-shaped pattern of silk. Referred to as web decorations or stabilimenta, these bands are thought to increase the species' prey capture rate - however, in other species, they have been found to protect the spider against predators.

A. keyserlingi is an important model species in studies of spider ecology and behaviour. Using this species scientists have investigated sperm competition, sexual size dimorphism, cryptic female choice, the role of pheromones in mating behaviour and the function and evolution of web decorations.

Its main predators in Sydney are mantids and birds.

This type of orb-weaver is cathemeral.

The spider was named by Fredrich Karsch in 1878 after the mythological Greek character of Argiope, a nymph from the town Eleusis in Southern Greece. The specific name keyserlingi was chosen to honor arachnologist Eugen von Keyserling. 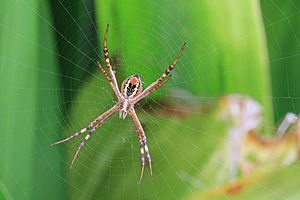 A photograph of the bottom of a female St Andrew's cross spider.

The St Andrew's cross spider can be found mostly in rainforest margins, open forests and heathlands of eastern Australia. They can also be found in the upper segment of the Northern Territory, in the upper segment of Tasmania, in the left segment of Western Australia, near Tedi River of Papua New Guinea, in the Malakula island of Vanuatu, in all areas of Lord Howe Island and even near the Shihe-Shiguan River in China. St Andrew's cross spiders construct medium-sized webs on low-shrubby vegetation.

Its web possesses meandering, bluish-white ribbons consisting of silk that can form either a full or partial cross through the center of the web. The purpose of the crucifix-like stabilimentum has long perplexed biologists. Biologists first thought that the stabilimentum's purpose is to strengthen the web. Other ideas associate it with capturing prey or evading it's predators, though the purpose of its stabilimentum remains a mystery. One feature of the stabilimentum is that it effectively reflects ultraviolet light, making it attractive to flying insects. Biologists think this may be to increase the chance of catching its prey. The design of the stabilimentum makes the web and the spider obvious to diurnal predators, especially birds and wasps. However, the shape of the crucifix-like decoration can vary from 3 shapes, a complete cross, a partial cross possessing 1-3 arms, or occasionally an absence of a crucifix-like decoration. This variability can induce web-recognition problems for predators. Biologists also found a possibility that the stabilimentum may be a warning to predators to stay away.

Prey of the St Andrew's cross spider are:

The orb-weaver then wraps its prey immaculately with silk before digesting, though smaller prey may be prioritized.

Mating takes place from summer to autumn and is a perilous occasion for miniature male St Andrew's cross spiders. One or more males settles on the upper segment of the web, some of them may even be missing legs; caused by encountering inhospitable females. The male then materializes a mating thread within the web, which it attracts the hospitable female by oscillating the thread. The female then hangs its pear-shaped sac in a mesh of threads, frequently surrounded by leaves to camouflage the sac's greenish silk. However, the egg sacs are the target of wasps and flies.

All content from Kiddle encyclopedia articles (including the article images and facts) can be freely used under Attribution-ShareAlike license, unless stated otherwise. Cite this article:
Argiope keyserlingi Facts for Kids. Kiddle Encyclopedia.