Austin, is one of seventy-seven officially designated community areas in Chicago. It the currently the largest community area both geographically and by population. Austin's eastern boundary is the Belt Railway located just east of Cicero Avenue. Its northernmost border is the Milwaukee District / West Line. Its southernmost border is at Roosevelt Road from the Belt Railway west to Austin Boulevard. The northernmost portion, north of North Avenue, extends west to Harlem Avenue, abutting Elmwood Park. In addition to Elmwood Park, Austin also borders the suburbs of Cicero and Oak Park.

In 1835, Henry DeKoven purchased prairie land in the region. In 1857, a group of citizens formed the Town of Cicero, a ten member local governing body that covered modern day Cicero, Oak Park, Berwyn and Austin. Eight years later, DeKoven’s land was bought by Henry W. Austin. Austin, a businessman and real estate speculator, developed the namesake Austinville subdivision. Its population grew exponentially as the area’s attractive amenities and access to suburban railroad service drew in population. In 1870, the Town of Cicero placed its town hall in Austin. However, by the 1890s, the heavily populated Austin area dominated town politics, but did not constitute a majority of voters. The Austin controlled township government allowed the Lake Street Elevated to extend into Oak Park. Outraged, the other residents of Cicero Township voted to allow Chicago to annex the Austin area in an 1899 referendum. The residents of Austin voted against the referendum.

After its annexation, Austin continued to maintain an independent, suburban identity. By the 1920s, the area had developed significant street railways to serve its commuter population. This infrastructure attracted a large group of European immigrants to the community. In 1926, it was estimated the area had approximately 140,000 residents. In 1923, Austin Hospital opened. In 1938, the hospital, now called William Temperance Hospital, was taken over by Sisters of Saint Casimir who operated the hospital as Loretto Hospital.

In 1949, construction began on the Eisenhower Expressway which bisected the southern portion of Austin.

In the mid-1960s, African-Americans began moving into Austin proper. This created animosity amongst the white residents who opposed integrated schools. By 1970, despite the aggressive blockbusting efforts of realtors, the Austin community was 32% black. A decade later, it was 73% black. This trend would continue for the rest of the twentieth century.

The latter half of the twentieth century also saw significant divestment from the community. The Central station on the Chicago Transportation Agency’s Congress Line was closed on September 2, 1973. In 1988, West Side Health Authority was formed after the closure of St. Anne's Hospital. In 1991, the Sisters of Saint Casimir gave control of Loretto Hospital to a management company.

In 1999, developers agreed to turn the abandoned Galewood rail yard into an industrial park. During the development of the proprety, then-Alderman Ike Carothers solicited a bribe to allow the permitting process and zoning changes to move forward. The subsequent trials created a political scandal, and ended with the conviction of the developer and Carothers on various felony charges. The $60 million dollar development ultimately brought new homes and a movie theater to the neighborhood. 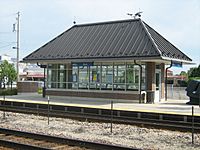 Austin is Chicago's largest community area both by population and by land area. The Austin community area is made up of four neighborhoods; Galewood, The Island, North Austin and South Austin.

Galewood is named for Abram Gale who bought a farm on the area in 1838. The neighborhood is bordered by the Milwaukee District / West Line to the north, Harlem Avenue to the west, North Avenue to the south and Central Avenue to the east. The area is a historically Italian-American community with a sizable population of Chicago city employees. Since the 1980s, it has seen an increase in African American and Latino residents, but this integration has occurred peacefully in contrast with other areas of Chicago.

Galewood has two stations on the Milwaukee District West Line. The first station, Mars station functions as a stop for employees of the nearby Mars, Incorporated factory and Shriners Hospitals for Children, the latter of which is located in Belmont Cragin. The Mars station only stops during traditional commuting hours. The second, Galewood station is located west of Mars station and is a regular service station.

The neighborhood has strong ties with neighboring Montclare, including sharing a namesake library in the Chicago Public Library system, and is sometimes considered as part of that neighborhood and not the Austin community.

The Island neighborhood is located in the southwest corner of the Austin community. It has a population of approximately 1,700 residents. It encompasses roughly a square mile and its western and southern borders are to the suburbs of Oak Park and Cicero respectively. It is further isolated from the rest of Austin by an industrial corridor to its east and railroad tracks and Interstate 290 to the north. It is only accessible from Harlem Avenue.

The Island was the last of Austin’s neighborhoods to integrate. In the 1980s, when the rest of Austin was over 70% African-American, the Island did not have a single African-American family. In 1984, when an African-American family attempted to move in on Roosevelt Road, they were met with violent resistance and shortly moved out. Politically, the area went heavily for Jane Byrne in the Democratic primary and for Edward Vrdolyak against Harold Washington in the 1987 mayoral election that broke down on racial lines. Today, the Island is an integrated community.

The area, once industrial, has a diverse economy. Chicago Studio City, the largest film studio in the Midwestern United States, is located here.

South Austin is the area’s largest neighborhood. It is bordered by Division Street to the north, Austin Boulevard to the west, Roosevelt Road to the south and Cicero Avenue to the east. During the Austin area’s transition from a predominantly white community to a predominantly African-American community, the South Austin neighborhood was the first neighborhood to become African-American majority. The neighborhood is characterized by its numerous historic buildings. The neighborhood is home to six landmarks on the National Register of Historic Places; Austin Historic District, Austin Town Hall Park Historic District, Columbus Park, First Congregational Church of Austin, Joseph J. Walser House and the Seth Warner House. Austin Town Hall Park, modeled after Philadelphia's Independence Hall, is also in this neighborhood.

According to a 2016 analysis by the Chicago Metropolitan Agency for Planning, there were 99,711 people and 32,277 households residing in the area.

All content from Kiddle encyclopedia articles (including the article images and facts) can be freely used under Attribution-ShareAlike license, unless stated otherwise. Cite this article:
Austin, Chicago Facts for Kids. Kiddle Encyclopedia.