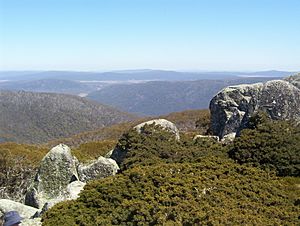 The Australian Alps occupy less than 0.3% of the Australian landmass and run for 600 km from the Brindabella Ranges near Canberra along the borders of the Australian Capital Territory, New South Wales and Victoria almost as far as Melbourne. The highest point is Mount Kosciuszko (2,228 m) in the Snowy Mountains. On the Australian mainland these are the south-eastern section of the country's Great Dividing Range while there are also significant elements of montane grassland in Tasmania. These mountain areas are notable in Australia, which is mostly flat and dry, and the Alps receive almost a quarter of the country's rainfall and are the water source for almost half of the population. Winters are dark, cold and windy with snow on the ground, with Mount Kosciuszko for example only having 10 frost-free days per year.

On the mainland, the Australian Alps montane grasslands are surrounded at lower elevations by the Southeast Australia temperate forests ecoregion.

The montane grasslands are a mixed habitat of grassland, heath and bog that is home to a rich collection of Alpine and other plants adapted to the cold climate, snow and harsh dry winters. The ecoregion can be sub-categorised in to montane (between 1,100 m and 1,400 m), subalpine (between 1,400 m and 1,850 m), and alpine (normally above 1,850 m) bands. At lower elevations a number of different types of eucalyptus tree including mountain ash '(Eucalyptus regnans) grow on the rich soils of the mountain valleys while the trees of the subalpine elevations are snow gum (Eucalyptus pauciflora)and black sallee (Eucalyptus stellulatea) with a ground cover of heath shrubs. The tree line is between 1600 and 1800 m and above that the alpine flora consists predominantly of species of Poa (snow grass), usually associated with closed and open shrublands of orites, Grevillea, Prostanthera, and Hovea. At the highest alpine elevations, these mosaics may give way to a feldmark or, in zones where snow lies into the summer months, to a snow patch community. Sphagnum bog communities of Sphagnum cristatum and Empodisma minus (spreading rope-rush) occur in stream beds or other low-lying areas.

The occurrence of grasslands represents an ecological climax condition, the culmination of a cycle of colonisation of bare ground by woody shrubs which provide protection for seedlings of grass species. The shrubs senesce after 40 to 50 years, leaving a closed canopy.

This is an ecoregion generally thought to have experienced long periods of minimal disturbance prior to European settlement. Since the nineteenth century, grazing and an increased incidence of fire resulted in a reduction in range condition, and extensive damage to bog communities, from which plant communities have been slow to recover. However the Alps have long been protected as national parkland in order to preserve the water sources and most of the region is now contained in large contiguous National Parks. These include Brindabella and Namadgi National Park and Bimberi and Scabby Range Nature Reserves near Canberra, Kosciuszko in New South Wales, and Alpine and Snowy River National Parks and the Avon Wilderness Park in Victoria. This parkland which does suffer litter, trampling of wildlife and other damage associated with tourism including the clearance of parkland to create ski resorts.

All content from Kiddle encyclopedia articles (including the article images and facts) can be freely used under Attribution-ShareAlike license, unless stated otherwise. Cite this article:
Australian Alps montane grasslands Facts for Kids. Kiddle Encyclopedia.