Barlaston is a village and civil parish in the borough of Stafford in the county of Staffordshire, England. It is roughly halfway between the city of Stoke-on-Trent and the small town of Stone. According to the 2001 census the population of the parish was 2,659, rising at the 2011 Census to 2,858.

The old parish church of Saint John is sited on the edge of the Wedgwood estate. It was built to the design of Charles Lynam in 1886-8, retaining the west tower from the original medieval building, with the subsequent addition of a vestry in 1969. In 1981 the Grade II listed building had to be closed owing to mining subsidence and a temporary building next to the church took its place until the new church was built on Green Lane.

Barlaston Hall c. 1756 by Sir Robert Taylor (architect) was at one time a Wedgwood family home. The Grade I listed Hall has been restored after damage from subsidence.

Wedgwood moved their pottery manufacturing business from Etruria, Staffordshire to a large modern factory in a new village in the north of the parish. The factory was planned in 1936 and built in 1938-40 to the designs of Keith Murray who was also a designer of Wedgwood pottery. The factory has a tourist visitor centre containing the Wedgwood Museum, with its own car-parks and a bus station.

Wedgwood railway station was opened for the factory in 1940 and is currently served by rail replacement bus (D&G Buses Service 14) on which all valid railway tickets and passes are accepted. 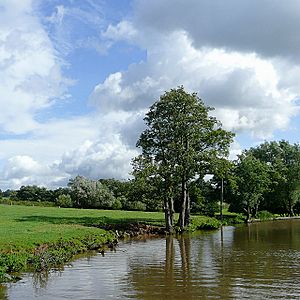 Trent and Mersey Canal at Barlaston

Close by the village are: the A34 road; the River Trent; the Trent and Mersey Canal; a route of National Cycle Network; and the railway - which all pass west of the village.

Barlaston railway station, opened by the North Staffordshire Railway on 17 April 1848, is now on the Manchester branch of the West Coast Main Line - but inter-city trains do not stop and the local passenger service was taken over by rail replacement bus (First Potteries No 23) in 2014, on which all valid railway tickets and passes are accepted. The campaign for the local train service to be restored is continuing.

D&G Bus services 12 & 14 from Hanley to Stafford via Trentham, Eccleshall and Stone run through Barlaston

Barlaston Golf Club is situated to the south of the town.

Barlaston and Rough Close Common covers some 50 acres (20 ha) between Barlaston and Blythe Bridge and is a designated local nature reserve.

Downs Banks is located a little to the south-east of Barlaston. It is owned and managed by the National Trust and is also known as 'Barlaston Downs'.

Barlaston Parish Council is made up of eleven elected members who serve the community for a period of four years.

Barlaston Parish Council is made up of up of 11 councillors elected from three wards. The last elections were in 2019, and resulted in the election of 11 Independent councillors.

The 2019 Barlaston Parish Council elections an uncontested election occurred in which all 11 seats were filled by independents. This was held alongside the Neighbourhood Plan Referendum on 7 May 2019.

Following the referendum which took place on 2 May 2019, Barlaston residents voted to adopt the meighbourhood plan which will now be consulted upon in future planning applications. This also allows for the parish in order to shape the future development of the area.

All content from Kiddle encyclopedia articles (including the article images and facts) can be freely used under Attribution-ShareAlike license, unless stated otherwise. Cite this article:
Barlaston Facts for Kids. Kiddle Encyclopedia.