The Nordenfelt-class Ottoman submarine Abdül Hamid (1886) was the first submarine in history to fire a torpedo whilst submerged. Two submarines of this class, Nordenfelt II (Abdülhamid, 1886) and Nordenfelt III (Abdülmecid, 1887) joined the Ottoman fleet. They were built in pieces by Des Vignes (Chertsey) and Vickers (Sheffield) in England, and assembled at the Taşkızak Naval Shipyard in Istanbul, Turkey. 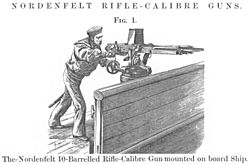 Basil Zaharoff, GCB, GBE (born Vasileios Zacharias; Greek: Βασίλειος Zαχαρίας Ζαχάρωφ; October 6, 1849 – November 27, 1936) was a Greek arms dealer and industrialist. One of the richest men in the world during his lifetime, Zaharoff was described as a "merchant of death" and "mystery man of Europe". His success was forged through his cunning, often aggressive and sharp, business tactics. These included the sale of arms to opposing sides in conflicts, sometimes delivering fake or faulty machinery and skilfully using the press to attack business rivals.

All content from Kiddle encyclopedia articles (including the article images and facts) can be freely used under Attribution-ShareAlike license, unless stated otherwise. Cite this article:
Basil Zaharoff Facts for Kids. Kiddle Encyclopedia.