Bateau Bay is a suburb of the Central Coast region of New South Wales, Australia. It is part of the Central Coast Council local government area. Bateau Bay lies in the area known as Darkinjung to Indigenous Australians. "Bateau" is French for "boat." The suburb was previously known as Boat Harbour, it was changed to the French version as a marketing activity in the 1970s.

Bateau Bay is about 6 km south of the town of The Entrance and 17 km northeast of Gosford's central business district. In 2006, it had a population of 11,599 people. Bateau Bay Beach provides access to Crackneck Point, which is a popular local surfing spot. Crackneck Point Lookout (about 100 metres above sea level) is a short distance from the beach, where there is a large clearing and carpark with information boards and a picnic-barbeque area. It provides views of The Entrance peninsula and north across Tuggerah Lakes.

Bateau Bay sewerage treatment plant was built in the late 1960s when at the time there was very little nearby development. Treated sewage is discharged into the sea off Bateau Bay at Wonga Point. Some people protest that sewage may end up on the nearby beaches. There has been no major sea pollution from the plant, there is a smell though over the Eastern side of the suburb. The treatment plant has operated for longer than most people have been resident. 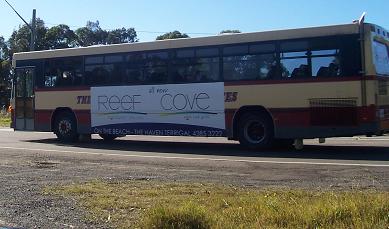 Red Bus on The Entrance Road

The Entrance District Sporting and Community Centre (EDSACC) is located on The Entrance Road, between Yakalla Street and Eastern Road. The precinct is separated into three areas: EDSACC North Ovals (soccer), EDSACC South Ovals (rugby league), and a Sports Centre that bisects the two. At the very south of the precinct is a golf driving range and a ten-pin bowling centre. EDSACC is home to the Killarney District Football Club and The Entrance Tigers Rugby League Club, as well as EDSACC Croquet Club. There are within the suburb fields that allow for playing of rugby league, rugby union, soccer, Australian rules football, softball, baseball, and cricket

EDSACC building has had a number of names in its time and provides tennis courts, indoor basketball courts, and a gymnasium, and was opened in 1979 by the Governor of New South Wales, Sir Roden Cutler.

It was previously the location of The Entrance Airport.

The precinct also has a golf driving range, which was formerly a football field, but was deemed unsafe due to its uneven surface. The home side—The Entrance Bateau Bay Blues—was forced to relocate to a field on Mingara's property at Tumbi Umbi. The Blues have since resettled at Eastern Road Oval in Killarney Vale.

Pat Morley Oval, located on Cresthaven Avenue, was until the early 1980s a rubbish tip and nightsoil depot and was used as a football oval in the 1990s. Development of a new oval adjacent to the existing Pat Morley Oval was completed in 2010, and is used for cricket and Australian rules football. The Entrance Bateau Bay Blues AFL Club will relocate there in 2011. Central Coast Softball will also use the new ground in the summer season. The main ground is home to The Entrance Bateau Bay United Soccer Club, the oldest soccer club on the Central Coast, having been established in 1949.

All content from Kiddle encyclopedia articles (including the article images and facts) can be freely used under Attribution-ShareAlike license, unless stated otherwise. Cite this article:
Bateau Bay, New South Wales Facts for Kids. Kiddle Encyclopedia.