Bathilde d'Orléans (Louise Marie Thérèse Bathilde;9 July 1750 – 10 January 1822), was a French princess. She was sister of Philippe Égalité, the mother of the executed duc d'Enghien and aunt of Louis-Philippe King of the French. She was known as Citoyenne Vérité during the French Revolution. By birth and marriage she held the rank of a princess of the blood.

Descended from both Louis XIV of France and his younger brother, Philippe of France, Duke of Orléans, Bathilde was born a princesse du sang and baptised with the names Louise Marie Thérèse Bathilde. She was the youngest child of Louis Philippe d'Orléans and Louise Henriette de Bourbon. Bathilde was born at the Château de Saint-Cloud on 9 July 1750.

Her mother died in 1759 when Bathilde was just eight years old. Her father, pressured by his mistress, Madame de Montesson, sent her to a convent. During her time at the convent, she became a very spiritual person.

Initially, Bathilde was considered as a possible bride for a distant cousin, Ferdinand, Duke of Parma, the favourite grandson of King Louis XV of France, however, that marriage never materialised.

Finally, in 1770, when she was twenty years old, she was allowed to leave the convent and marry her younger cousin, the Louis Henri de Bourbon, son and heir of Louis Joseph de Bourbon, Prince of Condé and his wife Charlotte Élisabeth Godefride de Rohan.

The scandal of her husband's adultery came out in 1778, and the consequences fell entirely on her shoulders. The couple separated in 1780. As a separated spouse, she was never received at court and was forced to reorganise her life at the Château de Chantilly.

In her isolation, she discreetly had an illegitimate daughter with a marine officer. Later, she passed the child off as the daughter of her secretary, in order to keep the little girl close to her. In 1787, she purchased the Élysée Palace from Louis XVI and had a hamlet constructed there.

During the French Revolution, just like her brother Philippe Égalité, Bathilde discovered democracy. She fell out with her royalist husband and son, who both chose to leave France after the storming of the Bastille. As the Ancien Régime crumbled, she took the name, Citoyenne Vérité, "Citizeness Truth". Threatened by the new revolutionary government, she offered her wealth to the First French Republic before it could be confiscated.

In April 1793, her nephew, the young Duke of Chartres (future Louis Philippe of the French), fled France and sought asylum with the Austrians. In retribution, the National Convention decreed the imprisonment of all Bourbons remaining in France. While other members of the Orléans family still in France were kept under house arrest, Bathilde, Philippe Égalité and his sons were imprisoned in the Fort Saint-Jean in Marseille. Badly rewarded for her fidelity to the democratic ideals of the Revolution, she survived a year and a half in a prison cell. In November of the same year, her brother was guillotined. Miraculously spared during the Reign of Terror, Bathilde was freed during the Thermidorian Reaction and returned to her Élysée residence in Paris. Poverty-stricken, she was forced to rent out most of the palace. 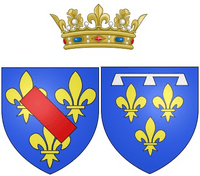 Coat of arms of Bathilde d'Orléans as the Duchess of Bourbon

In 1797, the Directoire decided to exile the last of the Bourbons still living in France. With her sister-in-law, Louise Marie Adélaïde de Bourbon, she went to Spain with her illegitimate daughter. Despite being forty-seven years old at the time, during the months which this journey took, she had an amorous intrigue with a handsome twenty-seven year old police officer (gendarme) under whose responsibility she had been put. The two maintained a correspondence during her exile.

Relegated to a place near Barcelona, Bathilde founded, despite her small means, a pharmacy and dispensary for the poor, and her house became a gathering place for those who needed aid. She became completely republican during this time period, despite her exile.

In 1804, she learned that Napoléon I, whom she admired, had had her only son, Louis Antoine, Duke of Enghien, kidnapped, and executed by firing squad in the moat of the Château de Vincennes. For ten years, the emperor kept the mother of his most famous victim from setting foot in France. Bathilde got her revenge in 1814, when the people, seeing in her the mother of the "Martyr of Vincennes," cheered her as she travelled the route back to Paris.

In 1815, at the start of the Bourbon Restoration, she returned to France. Louis XVIII traded with her the Hôtel Matignon for the Élysée Palace. Bathilde promptly installed a community of nuns on the premises and charged them with praying for the souls of the victims of the Revolution. Her family, in the new moral order of the day, wanted to see her rejoin her husband after a separation of thirty-five years, but she refused. Instead, she resumed her affair with the police officer who had escorted her to Spain in 1797.

In 1822, while she was taking part in a march towards the Panthéon, she lost consciousness, and drew her last breath in the home of a law professor who taught at the Sorbonne. After her death, her nephew, Louis-Philippe, wanting to give an air of respectability to her bohemian lifestyle, burned the manuscript of her memoirs and a file on her young police officer located in the war archives.

She was buried in the Orléans family chapel the Collégiale de Dreux.

All content from Kiddle encyclopedia articles (including the article images and facts) can be freely used under Attribution-ShareAlike license, unless stated otherwise. Cite this article:
Bathilde d'Orléans Facts for Kids. Kiddle Encyclopedia.