Baxter Estates is a village in Nassau County, on the North Shore of Long Island, in New York, United States. It is considered part of the Greater Port Washington area, which is anchored by Port Washington. The population was 999 at the 2010 census.

The Incorporated Village of Baxter Estates is located on the Cow Neck Peninsula, within the Town of North Hempstead, and is recognized as a Tree City USA. 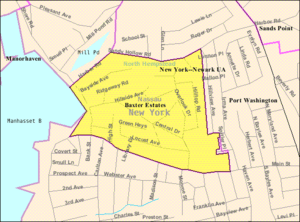 According to the United States Census Bureau, the village has a total area of 0.2 square miles (0.52 km2), all of it land.

Baxter Estates owes much of its history to the homestead settlement of "Cow Neck" built in 1673 by John Betts and Robert Hutchings, which still stands on its original site at the corner of Central Drive and Shore Road, overlooking Manhasset Bay. In c. 1741 this property was purchased by Oliver Baxter, and maps of the time show that an entire wigwam village, belonging to the Matinecock Indians, may have been located on Baxter's land.

The Baxters, who were shipbuilders, whalers and sea captains, retained the property until the 19th century. Hessian troops were quartered in the Baxter House during the Revolutionary War, and in 1895 the first library of Port Washington met in the parlor of the Baxter house. The residence is now a designated historic building. The current owner, Sabrina Wu, was in the process of submitting plans to demolish the landmarked home when a massive blaze broke out heavily damaging the home on February 5, 2017. Many residents speculated that the timing of the fire was suspicious, as Wu was fighting for years to demolish the home. The cause of the fire was not determined.

The Village of Baxter Estates was incorporated in 1931.

All content from Kiddle encyclopedia articles (including the article images and facts) can be freely used under Attribution-ShareAlike license, unless stated otherwise. Cite this article:
Baxter Estates, New York Facts for Kids. Kiddle Encyclopedia.