Beccles ( BEK-əlz) is a market town and civil parish in the English county of Suffolk. The town is shown on the milestone as 109 miles (175 km) from London via the A145 and A12 roads, 98 miles (158 km) north-east of London as the crow flies, 16 miles (26 km) south-east of Norwich and 33 miles (53 km) north-northeast of the county town of Ipswich. Nearby towns include Lowestoft to the east and Great Yarmouth to the north-east. The town lies on the River Waveney on the edge of The Broads National Park.

The name is conjectured to be derived from Becc-Liss* (Brittonic=Small-court). However, also offered is Bece-laes* (Old English=Meadow by Stream). Once a flourishing Anglian riverport, it lies in the Waveney valley and is a popular boating centre. The town was granted its Charter in 1584 by Elizabeth I.

Sir John Leman (died 1632) was a tradesman from Beccles who became Lord Mayor of London.

Long associated with Beccles (including recent mayors) is the Peck family. Among those Pecks who have made a place in history is the Rev. Robert Peck, described by Blomfield in his history of Norfolk as a man with a 'violent schismatic spirit' who led a movement within the church of St Andrews in nearby Hingham, Norfolk, in opposition to the established Anglicanism of the day. The Puritan Peck was eventually forced to flee to Hingham, Massachusetts, founded by many members of his parish, where he resided for several years, until King Charles I had been executed and Oliver Cromwell had taken the reins of government. Robert Peck then elected to return to Hingham, Norfolk, and resumed as rector of St Andrews Church. He died in Hingham but left descendants in America, including his brother Joseph Peck, who settled in Rehoboth, Massachusetts. Robert's daughter Ann Peck (16 November 1619 – 30 June 1672) also remained in Massachusetts, and married John Mason, who led colonial forces in the Pequot War.

Under the Municipal Corporations Act 1835 the borough was reformed, Beccles retaining municipal borough status until the reorganisation of local government in 1974, when it was merged with surrounding authorities to become Waveney District. The successor civil parish has adopted town status. 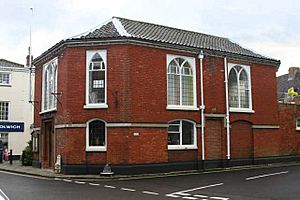 There is an 18th-century octagonal Town Hall.

Beccles Museum is housed in Leman House, a Grade I listed building and has a collection of agricultural, industrial and domestic items, including collections of tools, boat building, printing, costumes and natural history. 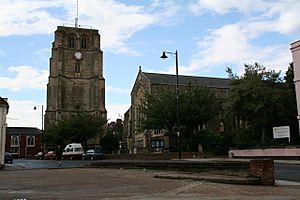 The townscape is dominated by the detached sixteenth-century bell tower (known as the Beccles bell tower) of St Michael's church. Like the main body of the church, the tower is Perpendicular Gothic in style and is 97 ft tall. The interior of the church was badly damaged by fire in 1586. It has a 13th-century font.

The tower is not attached to the church and at the wrong end of the church as the correct end would be too close to a large cliff.

It was at this church in 1749 that the mother of Horatio Nelson, Catherine Suckling, married the Reverend Edmund Nelson (a former curate of Beccles). The Suffolk poet George Crabbe married Sarah Elmy at Beccles church in the 18th century.

A number of bus services link the town with both Norwich and Lowestoft, as well as surrounding villages. Also, it runs a town service bus, every hour, during the daytime.

The town is served by Beccles railway station on the East Suffolk Line between Ipswich and Lowestoft. Services run hourly in each direction on weekdays, following the completion of the Beccles rail loop in 2012. This rebuilt the disused island platform and relaid track to allow trains to pass at Beccles, the only point north of Saxmundham where this is possible. Services are operated by Abellio Greater Anglia.

The town was formerly the southern terminus of the Yarmouth to Beccles Line, which ran across the River Waveney marshes to Great Yarmouth, and the eastern terminus of the Waveney Valley Line, linking to the Great Eastern Main Line at Tivetshall in Norfolk. Both lines closed, in 1954 and 1966 respectively; the latter as a result of the Beeching Cuts.

Beccles Airfield is located at Ellough, around 3 miles (4.8 km) south-east of the town. Originally built in 1942 as a wartime airfield, it was used as a heliport servicing the North Sea petrochemical industry and is now a base for light aircraft and parachuting. 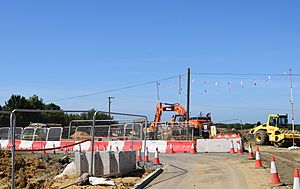 Construction of the Southern Relief Road, in the summer of 2018

The town is by-passed to the north by the A146 road between Norwich in Norfolk and Lowestoft in Suffolk. The by-pass was built in the 1980s and the main road previously ran through the town, crossing the River Waveney at the narrow Beccles bridge. The link road between the A146 and the town is George Westwood Way, in memory of a Deputy Mayor, George Lionel Westwood, who fought hard for the construction of the by-pass.

The A145 used to run from the A146 through the town centre to link with the A12 at Blythburgh, 11 miles (18 km) to the south of Beccles. The official route of the road now runs via the Beccles Southern Relief Road to indicate to drivers, particularly those of HGVs, that they can avoid the town; this is intended to make the relief road effective in keeping unnecessary traffic out of the town.

In 2006, a southern relief road for Beccles was approved, running from a roundabout just south of the town towards Ellough where the A145 connects with an industrial area, before joining with the A146 at North Cove. The completion cost was around £7.0 million and the road forms part of Suffolk County Council traffic management plans. It allows north–south industrial traffic to by-pass the narrow streets of the town centre, reducing congestion and increasing safety and officially opened on 25 September 2018.

For many years, Beccles Sea Cadets – and more recently, Beccles Royal Marines Cadets – under their training ship name T.S. Brave have worked within the community by assisting organisations and activities such as the Beccles Carnival. They share a varied and colourful affiliation with HMS Brave.

Beccles is also home to 759 (Beccles) Air Cadets,[1] who take part in a variety of activities such as flying and gliding, expeditions and sports. Beccles Air Cadets play a small role in the community

Beccles' main football team is Beccles Town F.C., established in 1919. As of the 2012–13 season, they are members of the Anglian Combination Premier Division. Beccles also has a football team called Beccles Caxton.

Ellough Park Raceway is south-east of Beccles on the site of the old Ellough airfield. It is a local centre for kart racing.

The annual Beccles Carnival and Family Fun weekend is held during the third weekend in August.

Beccles is served by Sir John Leman High School (age 11–18) and SET Beccles School (11–16) for secondary education, both of which admit children from the town and the surrounding area, including from primary schools in Norfolk. Until 2012 a middle school system operated in the town, with most children moving to middle school at age 9 and on to high school at age 13. The Sir John Leman High School dates from 1632 when it was established in the town after the death of John Leman. It was a grammar school between 1914 and 1971.

All content from Kiddle encyclopedia articles (including the article images and facts) can be freely used under Attribution-ShareAlike license, unless stated otherwise. Cite this article:
Beccles Facts for Kids. Kiddle Encyclopedia.