The Begoniaceae are a family of flowering plants with about 1400-1500 species occurring in the subtropics and tropics of both the New World and Old World. All but one of the species are in the genus Begonia. The only other genus in the family, Hillebrandia, is endemic to the Hawaiian Islands and has only one species.

Many varieties (or cultivars) of some species and hybrids of the genus Begonia are used as ornamental plants.

Stems are upright (vertical) and many species form rhizomes or tubers (fleshy, thickened underground stems). In some cases, the stems are very short and the leaves are in a group close to the soil.

The leaves of most species are simple, undivided and with sides more or less unequal; in very few cases they are compound (divided). They are alternate or, when the stem is very short, they are all in a group.

Begoniaceae plants are mostly monoecious, so there are male and female flowers on the same plant; very few are dioecious, with only one kind of flower so the plants are either male or female. Flowers are grouped in inflorescences.

The fruits are capsules (simple, dry fruits) and sometimes berries; they have many very small seeds.

The chromosome number is variable, n=10-21 or more. 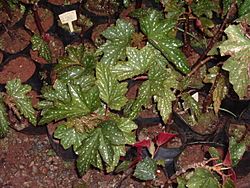 The family Begoniaceae was named in 1820 as Begoniae by the Bohemian scientists Friedrich Graf von Berchtold and Jan Svatopluk Presl in Prirozenosti Rostlin, 1:270, and then in 1824 as Begoniaceae by the Swedish botanist Carl Adolph Agardh, published in Aphorismi Botanici.

There are two genera in this family:

The New Guinean genus Symbegonia Warb. has recently been reduced to a section of Begonia.

The species of this family are found abundantly in all moist tropical countries, absent only from the Australian tropical forests.

One species, B. grandis grows in the temperate zone, growing as far north as near Beijing (China).

Some species, hybrids and cultivars of the genus Begonia are used worldwide as ornamental plants in parks, gardens, balconies and as houseplants because they have beautiful leaves and flowers.

All content from Kiddle encyclopedia articles (including the article images and facts) can be freely used under Attribution-ShareAlike license, unless stated otherwise. Cite this article:
Begoniaceae Facts for Kids. Kiddle Encyclopedia.