The Berkeley Pit is a former open pit copper mine located in Butte, Montana, United States. It is 1 mi (1,600 m) long by 1⁄2 mi (800 m) wide with an approximate depth of 1,780 feet (540 m). It is filled to a depth of about 900 feet (270 m) with water that is heavily acidic (2.5 pH level), about the acidity of Coca-Cola, lemon juice, or gastric acid. As a result, the pit is laden with heavy metals and dangerous chemicals that leach from the rock, including copper, arsenic, cadmium, zinc, and sulfuric acid.

The mine was opened in 1955 and operated by the Anaconda Copper Mining Company, and later by the Atlantic Richfield Company (ARCO), until its closure on Earth Day in 1982. When the pit was closed, the water pumps in the nearby Kelley Mine, 3,800 ft (1,200 m) below the surface, were turned off, and groundwater from the surrounding aquifers began to slowly fill the Berkeley Pit, rising at about the rate of 1 ft (300 mm) a month. Since its closure, the water level in the pit has risen to within 150 ft (46 m) of the natural water table.

The Berkeley Pit is currently one of the largest Superfund sites. The water, with dissolved oxygen, allows pyrite and sulfide minerals in the ore and wall rocks to decay, releasing acid. The acidic water in the pit carries a heavy load of dissolved heavy metals. A water treatment plant has been operating since October 2019

The Berkeley Pit is a tourist attraction, with an adjacent gift shop. An admission fee is charged to go out on the viewing platform. 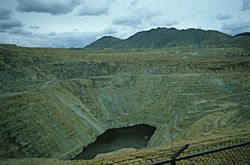 The underground Berkeley Mine was located on a prominent vein extending to the southeast from the main Anaconda vein system. When open pit mining operations began in July 1955, near the Berkeley Mine shaft, the older mine gave its name to the pit. The open-pit style of mining superseded underground operations because it was far more economical and much less dangerous than underground mining.

Within the first year of operation, the pit extracted 17,000 tons of ore per day at a grade of 0.75% copper. Ultimately, about 1,000,000,000 tons of material were mined from the Berkeley Pit. Copper was the principal metal produced, although other metals were also extracted, including silver and gold.

Two communities and much of Butte's previously crowded east side were consumed by land purchases to expand the pit during the 1970s. The Anaconda Company bought the homes, businesses and schools of the working-class communities of Meaderville, East Butte, and McQueen, east of the pit site. Many of these homes were either destroyed, buried, or moved to the southern end of Butte. Residents were compensated at market value for their acquired property. 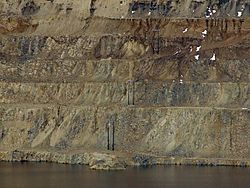 Perspective: Power line poles descending the walls of the pit. The poles are located slightly to the right of center in the above Composite Fisheye View, April 2005.

In 1995, a flock of migrating geese landed in the Berkeley Pit and died. A total of 342 carcasses were recovered. ARCO, the custodian of the pit, denied that the toxic water caused the death of the geese, attributing the deaths to an acute aspergillosis infection that may have been caused by a grain fungus, as substantiated by Colorado State University necropsy findings. These findings were disputed by the State of Montana on the basis of its own lab tests. Necropsies showed their insides were lined with burns and festering sores from exposure to high concentrations of copper, cadmium, and arsenic. (Levels of copper are high enough that Montana Resources has mined copper directly from the water.)

On November 28, 2016, several thousand snow geese died after a large flock landed in the pit's water to avoid a snow storm. Immediately after the event, officials made efforts to scare birds away and prevent more from landing in the area. An official report issued in 2017 by the U.S. Fish and Wildlife Service found that the 3,000 to 4,000 snow geese that died at the Berkeley Pit were killed by exposure to sulfuric acid and heavy metals.

The Berkeley Pit started utilizing Phoenix Wailers, which have been effective in deterring birds from landing at or staying in Berkeley Pit for an extended period of time. Studies have shown that the Wailers have been effective in limiting bird deaths in most cases, but they have not worked as well when faced with a large number of birds. Staff also use firearms to scare away birds during spring migration seasons.

Construction began on a treatment plant at the Berkeley Pit in 2018, to treat water in the Pit before it would contaminate local groundwater. The treatment facility will be able to treat ten million gallons of water per day. Construction of the $19 million facility was completed in August 2019 and the first discharge of treated water into a local creek happened in October 2019.

The Butte mining district is characterized by the Late Cretaceous Boulder batholith which metamorphosed surrounding rocks during the Laramide orogeny. Ore formation occurred with the intrusion of the Butte quartz monzonite pluton. Mining of sulfide minerals began in the district in 1864. Placer deposits were mined out by 1867. Silver vein lodes were then the most productive until copper was discovered in 1888. Open-pit mining started in 1955. Copper has historically been the main metal produced, though lead, zinc, manganese, silver and gold have been produced at various times.

Organisms in the water

A protozoan species, Euglena mutabilis, was found to reside in the pit by Andrea A. Stierle and Donald B. Stierle, and the protozoans have been found to have adapted to the harsh conditions of the water. Intense competition for the limited resources caused these species to evolve the production of highly toxic compounds to improve survivability; natural products such as Berkeleydione, berkeleytrione, and Berkelic acid have been isolated from these organisms which show selective activity against cancer cell lines. Some of these species ingest metals and are being investigated as an alternative means of cleaning the water.

All content from Kiddle encyclopedia articles (including the article images and facts) can be freely used under Attribution-ShareAlike license, unless stated otherwise. Cite this article:
Berkeley Pit Facts for Kids. Kiddle Encyclopedia.