Bernardsville is a borough in Somerset County, New Jersey, United States. The borough is nestled in the heart of the Raritan Valley region. As of the 2010 United States Census, the borough's population was 7,707, reflecting an increase of 362 (+4.9%) from the 7,345 counted in the 2000 Census, which had in turn increased by 748 (+11.3%) from the 6,597 counted in the 1990 Census. Bernardsville is often mispronounced as "Ber-NARDS-ville" as opposed to the correct pronunciation "BER-nards-ville".

Bernardsville was incorporated as a borough by an act of the New Jersey Legislature on March 6, 1924, from portions of Bernards Township, based on the results of a referendum held on April 29, 1924. The borough was named for Sir Francis Bernard, 1st Baronet, who served as governor of the Province of New Jersey. In 2009, part of the borough was listed on the National Register of Historic Places as the Olcott Avenue Historic District.

Bernardsville was originally a section of Bernards Township known as Vealtown. In 1840, Vealtown became Bernardsville, named after Sir Francis Bernard, Colonial governor of New Jersey from 1758 to 1760. Located in the northernmost part of Somerset County, just 12 miles (19 km) south of Morristown, the borough includes some of the last vestiges of the Great Eastern Forest.

During the Revolutionary War, General Charles Lee rested his troops in Vealtown around the night of December 12 to 13, 1776. General Lee and some of his guard spent the night about 3 miles (5 km) southeast at White's Inn on the southeast side of Basking Ridge, near the manor house of Continental Army general William Alexander, Lord Stirling. On the morning of December 13, General Lee was captured by the British and removed to New York.

After the Civil War, many wealthy and prominent New Yorkers moved into the area, first as summer visitors, then as permanent residents of the Bernardsville Mountain.

The Gladstone Branch railroad line was built through Bernardsville in 1872 and played an important role in the borough's development. Bernardsville did not become an independent municipality until 1924, when it split from Bernards Township.

The New Jersey State Review Board for Historic Sites recommended the creation of the Olcott Avenue historic district on February 10, 2009. While the Olcott Avenue School is but one historic structure within Bernardsville's first historic district area, the area's appeal and historic significance is part of the story of the rise of the middle class in Bernardsville and how this particular location impacted the entire region, from the downtown, Little Italy, and the Mountain Colony areas.

Unincorporated communities, localities and place names located partially or completely within the borough include Blazuers Corner, Mine Brook and Somerseten.

Bernardsville has a Humid continental climate with cold, snowy winters and warm to hot, humid summers on average.

Bernardsville is home to a diverse population including the "Little Paraguay" located on the Basking Ridge side of the train tracks.

There were 2,685 households out of which 40.6% had children under the age of 18 living with them, 67.2% were married couples living together, 7.5% had a female householder with no husband present, and 22.3% were non-families. 19.1% of all households were made up of individuals, and 7.8% had someone living alone who was 65 years of age or older. The average household size was 2.87 and the average family size was 3.27. 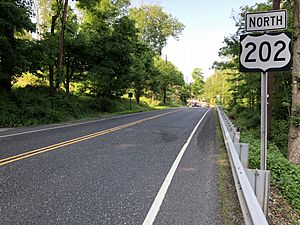 The most prominent roads directly serving Bernardsville are U.S. Route 202 and County Route 525. Interstate 287 passes by just outside the borough.

NJ Transit train service is offered at the Bernardsville station on the Gladstone Branch and Morristown Line of the Morris & Essex Lines, with service to Hoboken Terminal, Newark Broad Street station Secaucus Junction and to Penn Station in Midtown Manhattan.

Public school students in pre-kindergarten through twelfth grade attend the schools of the Somerset Hills Regional School District, a regional school district serving students from Bernardsville, Far Hills and Peapack-Gladstone, along with students from Bedminster who are sent to the district's high school as part of a sending/receiving relationship. As of the 2017–18 school year, the district, comprised of three schools, had an enrollment of 1,975 students and 158.0 classroom teachers (on an FTE basis), for a student–teacher ratio of 12.5:1. Schools in the district (with 2017–18 enrollment data from the National Center for Education Statistics) are Marion T. Bedwell Elementary School with 568 students in grades PreK–4, Bernardsville Middle School with 523 students in grades 5–8 and Bernards High School with 852 students in grades 9–12. The district's board of education has nine elected members (and one appointed member) who set policy and oversee the fiscal and educational operation of the district through its administration. The nine elected seats on the board are allocated to the constituent municipalities based on population, with six seats allocated to Bernardsville.

The School of Saint Elizabeth, established in 1916, is a parochial school serving students in pre-kindergarten through eighth grade that operates under the auspices of the Roman Catholic Diocese of Metuchen.

People who were born in, residents of, or otherwise closely associated with Bernardsville include:

All content from Kiddle encyclopedia articles (including the article images and facts) can be freely used under Attribution-ShareAlike license, unless stated otherwise. Cite this article:
Bernardsville, New Jersey Facts for Kids. Kiddle Encyclopedia.