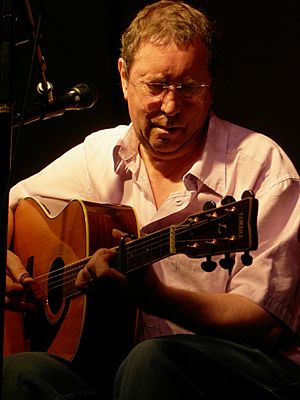 Herbert "Bert" Jansch (3 November 1943—5 October 2011) was a Scottish singer-songwriter regarded as one of Britain's great folk guitarists. He was born in Glasgow, but his parents were German. After his father left the family they moved to Edinburgh. Jansch made his own guitar by the age of 12. After leaving school he began playing guitar, mainly blues, at various music clubs in Scotland and England.

His first album, Bert Jansch, was made in 1965 and quickly became successful. The song "Needle of Death" about drug addiction, created a lot of interest as this was a subject that was not talked about very much at that time. His second album, It Don't Bother Me, featured his friend John Renbourn, another great guitar player. The two players became very popular as a duo, and made the very successful album, Jack Orion, in 1966. This album had some traditional folk songs, including a version of "Blackwaterside", played in a jazz style. The rock band Led Zepplin later recorded his arrangement of the song.

Jansch and Renbourn made another duo recording in 1966 called Bert and John. They started playing with other musicians they met in London, and finally formed a band, Pentangle, with bass player Danny Thompson, drummer Terry Cox, and vocalist Jacqui McShee. Pentangle was instantly successful. Jansch did not enjoy fame, and left the band in 1973. He continued to play and make albums.

Jansch often played on other people's recordings, including the Babyshambles album Shotter's Nation (2007). In 2010, despite being ill with lung cancer, he went on tour in the USA with American musician, Neil Young. Jansch died of lung cancer in Hampstead, London.

Jansch has made many albums including:

All content from Kiddle encyclopedia articles (including the article images and facts) can be freely used under Attribution-ShareAlike license, unless stated otherwise. Cite this article:
Bert Jansch Facts for Kids. Kiddle Encyclopedia.