The Bigelow Monument is a public monument in Worcester, Massachusetts, United States. The monument, located in a small cemetery at the center of Worcester Common, honors Timothy Bigelow, a Patriot during the American Revolutionary War. The monument was dedicated on April 19, 1861, the 86th anniversary of the start of the war.

Timothy Bigelow was born in Worcester County, Massachusetts on August 12, 1739. As an adult, he worked as a blacksmith and owned a shop in Worcester. During the American Revolution, he was a Patriot, and He served as a colonel during the American Revolutionary War. He commanded the 15th Massachusetts Regiment and is notable for leading minutemen from Worcester during the Battles of Lexington and Concord, the first military engagement of the war. He was also involved in the Saratoga campaign and Valley Forge. Following the war, he commanded the Springfield Arsenal before dying on March 31, 1790 at the age of 51.

On December 23, 1859, the city council of Worcester passed an act allowing Timothy Bigelow Lawrence (Bigelow's great grandson and son of Abbott Lawrence) to erect a monument to Timothy Bigelow on top of his burial place, located in Worcester Common. Worcester Mayor Alexander Bullock designated a 20 square feet (1.9 m2) lot in the small cemetery in the commons for the monument. A committee was formed for the purposes of coordinating the monument's erection and dedication, and a group of prominent citizens organized to aid the committee, with former Massachusetts Governor Levi Lincoln Jr. as their chairman. In March 1861, the committee extended an invitation to Worcester native George Bancroft to give an oration at the monument's dedication, but he declined, citing his health. As part of the erection of the monument, Bigelow's body was exhumed and reinterred in a metallic casket. The monument itself was designed by George Snell, an architect from Boston. Two companies were involved in the construction of the monument, with the Granite Railway Company executing the granite portion of the monument and the marble, imported from Tuscany, was executed by Wentworth and Co. of Boston. 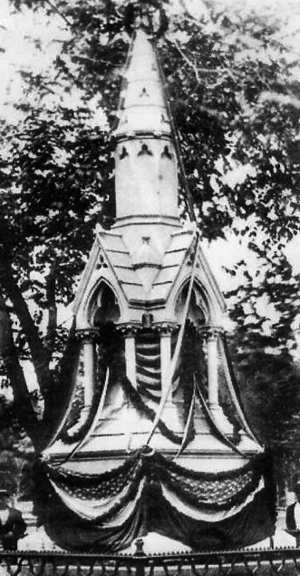 The monument at its dedication

The monument's dedication ceremony took place on April 19, 1861. On the Friday before the dedication (April 12) Mayor Isaac Davis and Governor Lincoln held a ceremony wherein multiple items were deposited within the monument, including multiple publications, a piece of wood from the Charter Oak, and a lock of hair belonging to Bigelow, among other items. The dedication ceremony, described in a 1914 book as one of the largest gatherings in the city, was attended by numerous descendants of Revolutionary War soldiers. The celebrations included a song, written by Clark Jillson, performed by a local glee club, followed by speeches given by several notable individuals. Among these included Lawrence, Mayor Davis, Governor Lincoln, Benjamin Thomas (grandson of Bigelow's contemporary Isaiah Thomas), and several members of the Bigelow family. While the dedication was taking place, members of the Massachusetts militia were involved in violent confrontations in the Baltimore riot of 1861, one of the first civil conflicts of the American Civil War. News of the violence would not reach Worcester until after the ceremony had concluded.

On Mother's Day in 2009, a military drill and wreath laying ceremony was held at the monument, with historian and author Ray Raphael presenting.

The plot of land the monument occupies is surrounded by an iron fence, with the monument itself resting on a granite platform measuring 9 square feet (0.84 m2). The architectural style of the monument, which is built primarily of Italian marble, is English Gothic. The monument's pedestal is four-sided, with carvings of ram's heads on each angle, with the following inscriptions on each face of the pedestal:

In memory of
The Colonel of the 15th Massachusetts Regiment
Of the Continental Army
In the War of Independence,
This monument
Is erected by his great-grandson,
Timothy Bigelow Lawrence,
Anno Domini 1861.

Above the pedestal, the four sides of the monument features carved canopies, atop which the monument becomes octagonal. A foliated cross surmounts the monument, with the total height of the structure being 30 feet (9.1 m).

All content from Kiddle encyclopedia articles (including the article images and facts) can be freely used under Attribution-ShareAlike license, unless stated otherwise. Cite this article:
Bigelow Monument Facts for Kids. Kiddle Encyclopedia.