Bix is a village in the civil parish of Bix and Assendon in South Oxfordshire, about 2.5 miles (4 km) northwest of Henley-on-Thames. The village is about 130 metres (430 ft) above sea level in the Chiltern Hills.

The remains of a Roman farmhouse were found during an excavation of the Common in 1955, as well as later Saxon remains. These were not considered to be worth retaining in an exposed condition and so the area was re-covered.

There were originally two villages: Bix Brand and Bix Gibwyn. The toponym has at various times been Byxe and Bixa. The Domesday Book of 1086 records Bixa as part of the Hundred of Binfield.

Bix Brand's original parish church of Saint James is a small Norman building in Bix Bottom, about 1 mile (1.6 km) north of the village. It has a nave, chancel and several Norman lancet windows. Later additions include the Perpendicular Gothic east window and another Perpendicular window in the south wall. In 1874 the architect John Gibson completed the village's new Church of England parish church, closer to the centre of the village, also dedicated to Saint James. The new church has a north aisle and transept as well as a nave and chancel. Two of the north aisle windows contain sections of late 15th century Flemish stained glass. 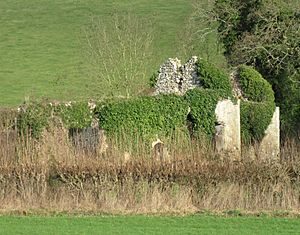 The ruins of Bix old church

The old church was abandoned in 1875 and became ruined and overgrown. Scenes from the 1971 Tigon British Film Productions film The Blood on Satan's Claw were filmed there. Funding from the Heritage Lottery Fund in 2015 has stabilised and preserved the ruin.

Bix Manor has a 17th-century barn.

The Warburg Nature Reserve in Bix Bottom is one of the largest that the Berkshire, Buckinghamshire and Oxfordshire Wildlife Trust owns and manages in Oxfordshire. It has an important population of Chiltern flora and fauna. It is a Site of Special Scientific Interest.

All content from Kiddle encyclopedia articles (including the article images and facts) can be freely used under Attribution-ShareAlike license, unless stated otherwise. Cite this article:
Bix, Oxfordshire Facts for Kids. Kiddle Encyclopedia.