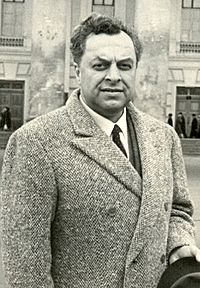 Boris Christoff (18 May 1914 – 28 June 1993) was a Bulgarian singer. He sang in the bass range. Critics thought him to be one of the great acting singers of the 20th century. He sang some 40 roles. His most famous role was Boris Godunov. He also received kudos for his Philip II in Verdi's Don Carlo, and for his Mephistopheles in Gounod's Faust. He sang several Wagnerian roles. These included Hagen in Gotterdammerung and King Mark in Tristan und Isolde.

Christoff was born in Plovdiv, Bulgaria. He sang in the Gusla Choir. King Boris of Bulgaria gave him a private stipend to study in Rome. He studied with Riccardo Stracciari. He also studied in Salzburg, Austria. After World War II, Christoff lived in Rome. In 1950, he was hired to sing the title role in Boris Godunov at Covent Garden. This became the role he was known for. He sang in the United States. He never sang at the Metropolitan Opera. Problems with his visa made this impossible.

All content from Kiddle encyclopedia articles (including the article images and facts) can be freely used under Attribution-ShareAlike license, unless stated otherwise. Cite this article:
Boris Christoff Facts for Kids. Kiddle Encyclopedia.