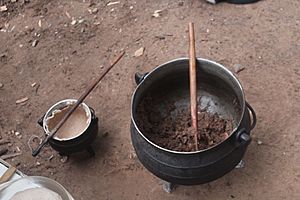 The cuisine of Botswana is unique but shares some characteristics with other cuisines of Southern Africa. Examples of Setswana food include pap, samp, vetkoek, bogobe and mophane worms. A food unique to Botswana is seswaa, salted mashed-up meat.

Watermelons are believed to have originated in Botswana. Other foods include morogo wa dinawa, madila and dikgobe.

It makes Batswana proud to have their own type of food. Batswana get most of the relish locally.These includes beef,goat meat,sheep,tswana chicken,Mophane worms and fish .Batswana also make home made refreshing drinks using water melon, morula and ginger powder. At weddings, sorghum meal is usually cooked and mixed with melon and this mixture is called Bogobe jwa lerotse. Usually the melon is pre prepared with sour milk and stored to be used whenever needed. Batswana are also good in food preservation. Among others they preserve meat by cutting it into small lengths like strings then dry it.When meat is like this it is called digwapa. They also fetch bean leaves, cook and dry them. It is also common among Batswana to make Mageu from leftover porridge or pap. Some tribes also preserve not very bad or rotten meat by drying it to be used as relish for a long time.This type if meat is called Mokungwana.Other food prepared during weddings are samp mixed with beans or cooked without beans and eaten with pounded meat called Seswaa. Batswana value their food from time immemorial. They consider it as part of their culture just like clothes and language.

The markets of Botswana are filled with a large variety of foods. Some are grown locally using irrigation and some are imported from neighbouring countries. A large quantity of high-quality beef is raised in Botswana. Lamb, mutton, chicken and other meats are also plentiful. Beef is the most popular meat, followed by goat meat. River fish are also part of Botswana cuisine.

Sorghum and maize are the main crops grown in Botswana. Wheat and rice and other kinds of cereals not grown locally are imported. Many different kinds of beans are grown, including cowpeas, ditloo, and letlhodi (mung beans). Peanuts (manoko) are also grown. Many vegetables are grown, such as spinach, carrots, cabbage, onions, potatoes, tomatoes, sweet potatoes and lettuce. There are some vegetables that grow in the wild that are available seasonally including thepe and delele (okra). Dried bean leaves are a popular Setswana food.

Many fruits are locally available, including marula. Watermelons, believed to have come originally from Botswana, are plentiful in season. Another kind of melon, called lerotse or lekatane, is also grown. There are some kinds of wild melon found in sandy desert areas which are an important food and water source for the people who live in those areas. Many vegetables are seasonal and are often dried or salted for preservation. There are many different ways of cooking dried vegetables. 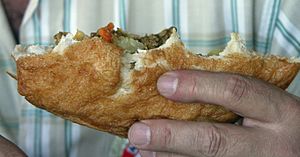 Vetkoek, a pastry, with mince that originated in South Africa

Seswaa, tshotlho or leswao (pounded beef) is a very popular traditional meat dish made for most special occasions. Usually prepared by men, it is cooked in a three-legged iron pot, simmered until soft, with only salt,cooking oil and water. It is usually prepared using goat meat or beef and it is a staple in most traditional occasions such as funerals and weddings.

Bogobe is made by putting sorghum, maize or millet flour into boiling water, stirring into a soft paste, and then cooking it slowly. Sometimes the sorghum or maize is fermented before cooking for some days to make it sour. This dish is called ting. This sour porridge can be cooked and eaten with meat or milk and sugar.it is called ting. Without the milk and sugar, ting Another way of making bogobe is to add sour milk and a cooking melon (lerotse). This dish is called tophi by the Kalanga tribe.

Bread flour is not part of the basic diet, but has been imported for some years, so there are various bread recipes that have become part of the national food. The most common are dumplings (matlebekwaneor madombi), flat cakes (diphaphatha) and fat cakes (magwinya). For these, the flour is made into dough which is cooked in different ways such as boiling with meat, cooking in hot oil or on hot coals putting on a pot lead. 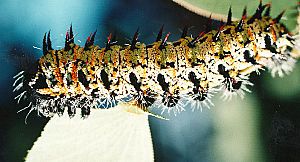 Popular foods in remote areas include morama bean, a huge underground tuber, and an edible fungus. Mopane worm, caterpillar of the moth Gonimbrasia belina, is cooked in hot ashes, boiled, or dried and fried.

Many soft drinks are produced in factories in Botswana, including Fanta and Coca-Cola.

There are other beverages such as mints called kgomodimetsing and longman. These are leaves which are usually mixed with tea for a good scented taste.

All content from Kiddle encyclopedia articles (including the article images and facts) can be freely used under Attribution-ShareAlike license, unless stated otherwise. Cite this article:
Botswana cuisine Facts for Kids. Kiddle Encyclopedia.