Bradford is a town in Orange County, Vermont, United States. The population was 2,797 at the 2010 census. Bradford is located on the county's eastern border, bordering both the Connecticut River and New Hampshire, and is a commercial center for some of its surrounding towns. 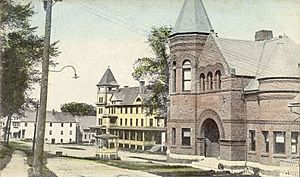 The earliest name of the settlement was Wait's River Town or Waitstown, in honor of Joseph Wait, a member of Rogers' Rangers. The town was originally part of Gloucester County in the Province of New York before becoming part of Vermont. In 1770, the town was established by New York patent: 3,000 acres (1200 hectares) were granted on May 3, 1770, and the town was named Mooretown after Sir Henry Moore, 1st Baronet, then the royal governor of New York. On October 23, 1788, at the request of town's residents, the town was renamed Bradford by the Vermont General Assembly, likely after Bradford, Massachusetts. According to the Vermont Encyclopedia, Bradford "has always been an industrial and commercial center for the surrounding rural towns and villages."

According to the United States Census Bureau, the town has a total area of 29.9 square miles (77.4 km2), of which 29.8 square miles (77.2 km2) is land and 0.1 square mile (0.2 km2) (0.20%) is water. The Waits River flows through Bradford in a southeasterly direction to its confluence with the Connecticut River, which forms the eastern boundary of the town. The town rises from the river's meadows through low hills and river valleys and finally Wright's Mountain (at an elevation of 1,822 feet) close to the border with Newbury to the north.

Bradford is bordered by the towns of Newbury to the north, West Fairlee and Fairlee to the south, and Corinth to the west.

Piermont, New Hampshire lies across the Connecticut River to the east. The Piermont Bridge, a Pennsylvania truss bridge erected in 1928, connects Bradford and Piermont.

There were 1,028 households out of which 33.8% had children under the age of 18 living with them. 51.8% were married couples living together, 12.5% had a female householder with no husband present, and 32.6% were non-families. 25.5% of all households were made up of individuals and 11.8% had someone living alone who was 65 years of age or older. The average household size was 2.48 and the average family size was 2.98. 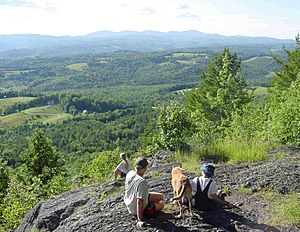 The town has a number of scenic views, including of the Connecticut River Valley, Waits River Valley, and White Mountains. Also of note is the view from Wright's Mountain.

All content from Kiddle encyclopedia articles (including the article images and facts) can be freely used under Attribution-ShareAlike license, unless stated otherwise. Cite this article:
Bradford, Vermont Facts for Kids. Kiddle Encyclopedia.