Brentwood is a borough in Allegheny County, Pennsylvania, United States, and is part of the Pittsburgh Metro Area. The population was 9,643 at the 2010 census.

The borough is located in the Allegheny Plateau region of the United States, and is situated 5 miles (8 km) south of the confluence of the Allegheny River and the Monongahela River to form the Ohio River.

Due to its position between the Great Lakes and the windward side of the Allegheny Mountains, Brentwood, along with the rest of the region, receives plentiful precipitation which supports lush vegetation. Also, because it is on the windward side of the mountains, it is often cloudy, having 203 cloudy days per year. The winter is particularly cloudy, with only 28 percent sunshine in December and 23 cloudy days. In the winter, when a northwest flow establishes itself over the Great Lakes, the wind blows from Lake Erie across eastern Ohio and western Pennsylvania. That wind carries moist air from the lake, producing clouds and heavy snow squalls.

Brentwood, located approximately 6 miles (10 km) from downtown Pittsburgh, was once an integral part of Baldwin Township, which included the villages of Brentwood, Point View, and Whitehall.

In 1914, a group of citizens in the village of Brentwood took a set of grievances to the Baldwin Township Board of Commissioners, regarding the lack of sidewalks, sewers, fire protection, police, and a school house. Upon further disregard of these necessities from the township, a group of men from the village held a meeting on January 27, 1915, to discuss secession. After considerable discussion, the boundary lines of Brentwood were finalized by the Board of Trade. Building a sidewalk along Brownsville Road was the first official action taken by the Board of Trade. On November 6, 1915, the Quarter Sessions Court of Allegheny County decreed that Brentwood was officially seceded from Baldwin Township. The proceedings to incorporate were filed on May 15, 1916, creating the Borough of Brentwood.

On December 4, 1915, special elections were held to elect a burgess, auditors, justices of the peace, high constable, tax collector, assessor, and councilmen. Brentwood’s first burgess was Bernard Kestner, sworn in on December 9, 1915. He served Brentwood for sixteen years. The board met monthly and continued to discuss necessary steps for the structure of the Borough.

On Labor Day, 1928, the borough celebrated the official opening of the park, pool, and paving of Brownsville Road.

A former councilman of Brentwood, Bob Cranmer, served as an Allegheny County commissioner, 1996–2000. He was involved with a number of historic government initiatives and large civic development projects, being both local and regional in scope. 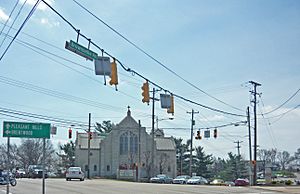 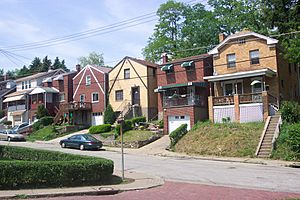 More recently, Brentwood Towne Square was built along Brownsville Road and Route 51. Many shops, restaurants, and offices are located in the square, such as Giant Eagle, Wendy's, a post office, State Liquor Store, Aspen Dental, LA Nails, Crazy Mocha, and other businesses.

Brownsville Road follows the route of a pre-Columbian era Native American Indian trail and footpaths connecting Redstone Old Fort with the "forks of the Ohio", a distance of 26 miles (42 km). It later became the road connecting Pittsburgh with Brownsville, Pennsylvania, and from there via Nemacolin's Path to Virginia and points further east. It was a major route for travel by stagecoach and Conestoga wagon. The road was significant during the Whiskey Rebellion, particularly its southern half. It has had several names over its history, including the Red Stone Road and the Brownsville Plank Road, or Southern Avenue.

The Point View Hotel dates back to 1832. General Andrew Jackson spent a night there before he entered Pittsburgh while campaigning for the presidency. General Zachary Taylor stopped for a night as well. President James Buchanan and Senator Thaddeus Stevens stayed on two occasions. Not only did the hotel have many guests who were quite important people, but the basement of the hotel was a stop on the Underground Railroad during the 1850s. The hotel was then turned into a restaurant and bar until the property was sold and demolished in November 2006, as it was never officially recognized as a historic landmark. A medical office building has been built on this site.

The John F. Slater Funeral Home, formerly the White Hall Tavern, was another important place in Brentwood’s history. In the earlier days of Brentwood's time, many city dwellers rode stagecoaches on Brownsville Road, because this was the only major roadway connecting the cities of Pittsburgh and Brownsville. The White Hall Tavern was just a short walk to the race track which was once on the site of the South Hills Country Club, which is why many people from the city stopped here for relaxation.

The Windsor Hotel was opened in 1882. Although there was a fire sixteen years later, it was rebuilt and remained a popular place for vacationers.

The Davis Farm House was another historical place in Brentwood’s history, although it was gained by the borough in 1968. The house and grounds became a senior citizens’ recreation center. Much debate was encountered when it was considered being torn down to build a new firehouse and recreation room. Although the house had been considered a historical site by much of the town, it was eventually torn down, and the new fire house was built in place of the senior citizens’ center.

The Brentwood High School Spartans play football, soccer, baseball, and softball, in the local park. Brentwood Borough opened the park and pool on July 4, 1928, but it was not until 1948 that the football stadium, track, four baseball fields, tennis courts, and basketball courts were built.

Brentwood’s public library is located at the center of the borough on Brownsville Road, at the entrance of Brentwood Park. A person can borrow books, movies, puppets, puzzles, magazines, and CDs. There is a children's area, and there are many computers for public access to the internet. The library hosts many children's events throughout the year including story times and visitations by authors. For adults the library hosts educational classes, informational meetings and book clubs.

The fire department was organized on December 8, 1915. In 1916, the police department, which was formed only of two men, was developed. In 1977, the EMS was founded.

Brentwood is served by the Brentwood Borough School District.

The Court of Common Pleas appointed Brentwood's first school board who took charge of school business in July 1916, and the first group of teachers were hired that same year in September. Brentwood's first school was Moore Elementary School, then only a four-room school house, which is still in use by children and teachers. Because Moore School was not sufficient in size for all the students in the Borough, Elroy School was built about three-quarters of a mile away toward Pittsburgh, and renovations were completed in 1925 to both schools.

The first Brentwood High School opened in the basement of Elroy School in September 1925 and only taught through ninth grade. The high school was newly built in 1932 adjacent to the current Brentwood Park; an addition was constructed in 1939 because of the increase in population, and once again in 1959. This renovation included more rooms and a new gymnasium.

In the late 1960s, Pennsylvania experienced a consolidation of school districts. Some wanted the Brentwood school district to be folded into the Baldwin-Whitehall district. However, this consolidation was never realized, and in 1972 a new four-story building containing classrooms and an indoor pool was constructed.

In the early 1990s the consensus on the School Board was to close Moore and Elroy schools and consolidate them into an expanded K-12th grade facility at the existing high school. An intense community debate on whether to close Moore and Elroy schools ensued with the supporters of preserving and rehabilitating Moore and Elroy prevailing. In 1997, the Board of Directors fully modernized and remodeled Elroy School and Moore School received two new additional classrooms. The district also built a new academic wing to the front of the 1939 building, and a second gymnasium was placed on the demolished third and fourth floors of the 1972 addition.

All content from Kiddle encyclopedia articles (including the article images and facts) can be freely used under Attribution-ShareAlike license, unless stated otherwise. Cite this article:
Brentwood, Pennsylvania Facts for Kids. Kiddle Encyclopedia.