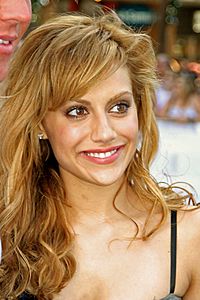 Brittany Murphy (November 10, 1977 – December 20, 2009) was an American actress and singer. She appeared in many movies and was the voice of Luanne on the American television show King of the Hill. Murphy was married to British moviemaker Simon Monjack (1970-2010) from 2007 until her death on December 20, 2009. She died of pneumonia. An overdose of legal drugs played a part in her death.

All content from Kiddle encyclopedia articles (including the article images and facts) can be freely used under Attribution-ShareAlike license, unless stated otherwise. Cite this article:
Brittany Murphy Facts for Kids. Kiddle Encyclopedia.