The Broadback River (French: Rivière Broadback) (In Cree: Chistamiskau Sipi) is a river in northern Quebec, Canada. It drains into Rupert Bay (a smaller bay at the south end of James Bay), just south of the Rupert River and Cree community Waskaganish. The major lake on the river's course is Lake Evans.

The river is a popular canoe-tripping destination.

The hydrographic basins adjacent to the Broadback River are:

The Broadback River originates at Frotet Lake, located 28.1 kilometres (17.5 mi) west of grand Mistassini Lake. From the mouth of Frotet Lake (located north of the lake), this river winds the Jamésie on 451 kilometers to finally reach the Rupert Bay close to the mouth of the Nottaway River.

In its course, the river crosses several lakes, including: Troilus Lake, Quenonisca Lake, Evans Lake (the largest) and Giffard Lake. It flows between the Rupert River rivers to the north and the Nottaway River to the south.

The Broadback, together with the Nottaway and Rupert Rivers, was initially considered to be dammed and diverted as part of the James Bay Project. However, in 1972 hydro-electric development began on the more northerly La Grande and Eastmain Rivers, and the NBR Project was shelved. With the decision to divert the Rupert River to the La Grande, it is not likely that the Broadback will be developed in the foreseeable future. 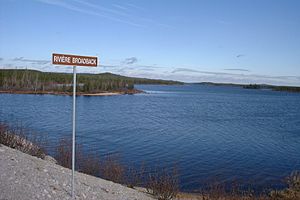 All content from Kiddle encyclopedia articles (including the article images and facts) can be freely used under Attribution-ShareAlike license, unless stated otherwise. Cite this article:
Broadback River Facts for Kids. Kiddle Encyclopedia.