My Little Pony: Friendship Is Magic facts for kids 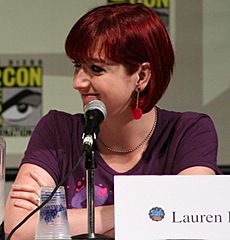 Lauren Faust, developer and initial showrunner of My Little Pony: Friendship Is Magic

A sample storyboard from the episode "Call of the Cutie", containing pencil sketches of the main characters, rendered backgrounds to establish settings, and instructions for the Flash animators, such as the panning shot shown in the second panel 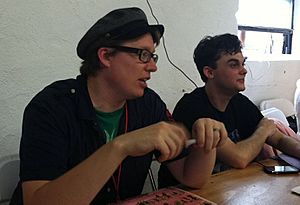 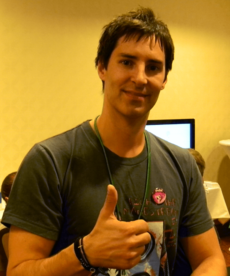 My Little Pony: Friendship is Magic is a Canadian-American cartoon that was shown on The Hub and is now shown on Discovery Family. It was made by Lauren Faust, who also worked on other cartoon shows which are The Powerpuff Girls and Foster's Home for Imaginary Friends. It started on October 10, 2010, and new episodes are still being made. The show's idea comes from the My Little Pony toys, which are made by the big toy company Hasbro.

The main characters are:

Popularity on the internet

In October 2010, shortly after the show started, Web blog Cartoon Brew wrote a blog called "The End of the Creator-Driven Era in TV Animation", which had attacked the show for being supported by a big brand name, saying that "today networks clearly prefer established properties over original ideas, and dislike dealing with individual artists who have a clear creative vision". That means that the writer did not like that the people who put TV shows on TV would put shows on that had a brand name and told older boring stories instead of TV shows that had new or original stories. The people in "/co/", the place in 4chan for cartoons and animations, who hadn't seen the show yet, were interested by the alarmist words in the blog and began watching the show, and liked the show for the story, characters, and animation style. Their reaction soon spread to the general board, "/b/", of 4chan. The reaction from 4chan created many My Little Pony recurring jokes and memes on the site.

Fans of the shows call themselves a "brony", a combination of the words "bro" and "pony". At first it was only meant to be used by male fans but the word is now used to describe any older fan of the show without it describing only one gender. A parody of Katy Perry's "California Gurls" called Equestria Girls was used for an ad by The Hub for the show, which has lyrics that also say the word "brony". Its title was later made into a movie which has human versions of the ponies in the show. Websites like "Equestria Daily" and "Ponychan" have been created to share stories, artwork, and news about the show. The websites get more than 100,000 visits a day. A video made by a high school student named Stephen who was using science to dissect some of the physical impossibilities on My Little Pony as part of a class presentation appeared on many news stations and also appeared on Tosh.0. During a phone interview on NPR's comedy radio show Wait Wait... Don't Tell Me! in June 2011, past President Bill Clinton correctly answered three questions about the show which led one journalist to jokingly refer to him as a brony.

The creator and executive producer for the show, Lauren Faust, has shown that she likes the older fans of the show through her DeviantArt page. In the first episode, a pegasus pony in the background at one time had crossed eyes, which was a mistake by an animator. The boards on 4chan called the character "Derpy Hooves". Faust listened to the fans, having wanted the character to be named "Ditzy", but let the pony's name stay as Derpy, and the people working on the show have kept the Derpy character with the cross-eyed look, putting her in episodes as a silly background character.

To help people who were in the 2011 Tōhoku earthquake, Faust sold some original drawings from the show along with a new picture of Derpy Hooves. The Derpy Hooves picture sold for more than $2000 on eBay.

At the end of Season 1, one of the show's animators said that Derpy would say some lines in Season 2. In the episode "The Last Roundup", which shows Applejack competing for the Equestria Rodeo, Derpy Hooves talked a few times. Rainbow Dash says Derpy's name and Derpy speaks with a young boy's voice. At first, people thought that her voice was done by Brian Drummond, but it was Tabitha St. Germain, who didn't know at first that Derpy was female. Parent groups complained that this was insensitive to people with disabilities, and Hasbro changed the episode by making the pony's voice more girly and making Rainbow Dash not say her name. Another pony character with neon colors in her hair, wearing sunglasses and using a DJ set in one episode, was given the stage name of "DJ P0N-3" in a poll with the other choices being "DJ Clip Clop", "Scratch", "Deadhor5" and "DJ Raverider". DJ P0N-3 was later in the Equestria Girls ad and has been a background character in some other episodes.

The sixth season has premiered in March 26, 2016 on Discovery Family and has 26 episodes.

All content from Kiddle encyclopedia articles (including the article images and facts) can be freely used under Attribution-ShareAlike license, unless stated otherwise. Cite this article:
My Little Pony: Friendship Is Magic Facts for Kids. Kiddle Encyclopedia.