Brown County is a county located in the U.S. state of Illinois. As of the 2010 census, the population was 6,937. Its county seat is Mount Sterling.

Siloam Springs State Park is located partly in this county.

Brown County was formed out of Schuyler County in 1839. It is named in honor of U.S. General Jacob Brown, who defeated the British at the Battle of Sackett's Harbor in 1813. 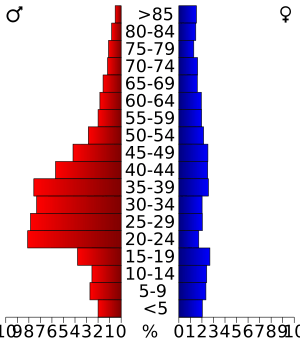 The Illinois state prison, Western Illinois Correctional Center, located south east of Mount Sterling, has an average daily population of 2,066. The all-male population and racial makeup of the prison is so large, compared to the rest of the county, that it skews the census demographic data. This is evidenced by the lopsided age pyramid.[1]

Brown County is divided into these nine townships:

All content from Kiddle encyclopedia articles (including the article images and facts) can be freely used under Attribution-ShareAlike license, unless stated otherwise. Cite this article:
Brown County, Illinois Facts for Kids. Kiddle Encyclopedia.