Burmese amber, or Burmite or Kachin amber, is amber from the Hukawng Valley in northern Myanmar. It is important for its fossils from the earliest part of the Upper Cretaceous, in the Cenomanian age, 99 million years ago. The amber has been commercially exploited since the first century AD. Research on the deposit may fund internal conflict in Myanmar.

The amber has flora and fauna especially arthropods such as insects and arachnids. There are also also birds, lizards, snakes, frogs and fragments of dinosaur remains.

The fossils arachnids in the amber include:

15 families of myriapods are in the amber

8 families of Entognatha are known

29 orders of insects are known, including:

Other groups of invertebrates include:

There are some vertebrates: 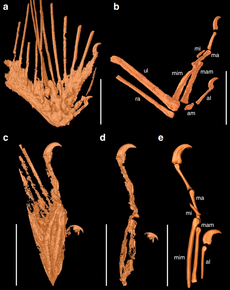 All content from Kiddle encyclopedia articles (including the article images and facts) can be freely used under Attribution-ShareAlike license, unless stated otherwise. Cite this article:
Burmese amber fossils Facts for Kids. Kiddle Encyclopedia.