Burnham-on-Crouch is a town and civil parish in the Maldon District of Essex in the East of England. It lies on the north bank of the River Crouch. It is one of Britain's leading places for yachting.

The civil parish extends 5 miles (8 km) east of the town to the mouth of the River Crouch. It includes the hamlets of Creeksea and Ostend west of the town, Stoneyhills to the north and Dammer Wick, West Wick and East Wick east of the town.

Historically, it has benefited from its location on the coast – first as a ferry port, later as a fishing port known for its oyster beds, and most recently as a centre for yachting. There are many listed buildings in the town, including the Grade II* listed Royal Corinthian Yacht Club designed in 1931 by the modernist architect Joseph Emberton. The Mangapps Railway Museum is located nearby.

Although the town has a population of little over 7,500, it is the principal settlement in the wider Dengie peninsula area (population 20,000), meaning it has facilities that are uncommon in small towns, such as a cinema, a laundrette, a post office, 22 licensed drinking establishments and three pharmacies.

Burnham-on-Crouch holds a bi-annual charity fund-raising pub crawl, an event which first took place in June 2007. Typically more than 100 local people walk through the town in themed fancy dress raising money for The Samaritans. There is both a summer and winter edition of the crawl.

The town has two community-based magazines, the larger of the two is "The Burnham on Crouch and Dengie Focus" which is delivered to every house and business in Burnham and Southminster and can be picked up from collection points throughout Dengie. The other is the Burnham and Dengie Hundred Review, it is smaller in size, A5 and is delivered free across the Dengie.

On the last Saturday of September, the town holds its Illuminated Carnival, which was held for the 100th year in 2008. The carnival takes place on the High Street and Quay with stalls, sideshows and displays, and culminates with a Grand Illuminated Procession in the evening, which leaves from the Clock Tower and proceeds around the town. There is also a fancy-dress competition for children. The carnival is sponsored by local businesses.

The Essex town was mentioned in the song "Billericay Dickie", by Ian Dury. This song alludes to Burnham's somewhat upmarket status in the county. 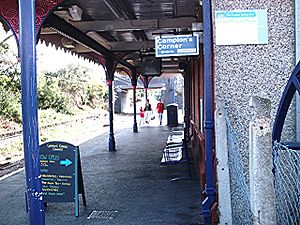 In view of the town's comparatively isolated position – 20 miles from Chelmsford, the nearest city – Burnham-on-Crouch railway station represents a vital transport link. The station is situated on a single-line branch from Wickford, which escaped closure in the 1960s by Beeching, as it was used to supply the nearby Bradwell nuclear power station. The branch line was electrified in the 1980s, and provides off-peak services to Wickford with direct services to and from London Liverpool Street during rush hour, thus allowing the town's inclusion in the London commuter belt. 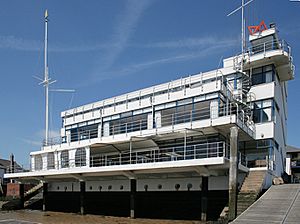 The Royal Corinthian Yacht Club at Burnham-on-Crouch, Essex. The international style building was designed by Joseph Emberton in 1931

Burnham-on-Crouch hosts an annual sailing event known as Burnham Week, which takes place in the last week of August. The week includes competitive yacht and dinghy racing on the River Crouch. The event is shared among the four established sailing clubs in Burnham: The Royal Corinthian Yacht Club (linked to the sailing club with the same name in Cowes, Isle of Wight), The Royal Burnham Yacht Club, The Crouch Yacht Club, and The Burnham Sailing Club.

This annual yacht regatta dates back to 1893. In the early years, Burnham Week was regarded as the last event in the sailing calendar. In the days before marinas afforded year-round access, many yachts were laid up for the winter in mud-berths on the east coast rivers. The racing fleets worked their way along the south coast, enjoying various events and regattas, having a final fling at Burnham before laying up. Today, the event is still growing strongly and the various sailing clubs produce many highly regarded sailors. The week provides a range of competitive racing events as well as a full party programme.

There are rugby union, cricket and lawn bowls clubs, all of which compete at local, county and regional levels.

Burnham Golf Club, an 18-hole course, is at Creeksea, approximately 1.5 miles from the town centre.

All content from Kiddle encyclopedia articles (including the article images and facts) can be freely used under Attribution-ShareAlike license, unless stated otherwise. Cite this article:
Burnham-on-Crouch Facts for Kids. Kiddle Encyclopedia.