Camuy is a municipality of Puerto Rico, bordering the Atlantic Ocean, north of Lares; east of Quebradillas; and west of Hatillo. Camuy is spread over 12 wards and Camuy Pueblo (The downtown area and the administrative center of the city). The town celebrated its 200th anniversary in 2007.

Camuy is part of the "Porta Atlántico" Tourist Area.

Camuy also known as "La ciudad romántica" was founded in 1807 by Petronila Matos, and formerly part of Arecibo is located in the northwestern coastal region of Puerto Rico, less than 5 minutes west of Hatillo on PR-2 and PR-119. The name Camuy is known to be derived from the Taíno language, although a number of legends give differing explanations for the origin of the name. One such legend claims the name comes from the Taíno word for "sun", another claims derivation from camuy , Taíno for "beautiful scenery", and still another states that Camuy was the name of the Taíno chief Yumac with the letters in reverse order. The "sun" legend is reflected in the coat of arms for the municipality.

In its beginnings Camuy was integrated into the Partition of San Antonio de la Tuna. The "partitions" were great expanses of land that divided Puerto Rico. This region today is known as Isabela, Puerto Rico. At the time the partition covered the areas between Aguadilla and Arecibo, what is known today as the municipalities of Camuy, Hatillo, Quebradillas, Isabela, Utuado, and San Sebastián.

The population of Camuy was 35,159 at the 2010 census, and it has land area of 46.3 square miles (120 km2). The municipality is part of the San Juan-Caguas-Guaynabo metropolitan area and is a popular suburb. It was named in 2015 by the U.S. Conference of Mayors as one of the most livable cities in the United States. 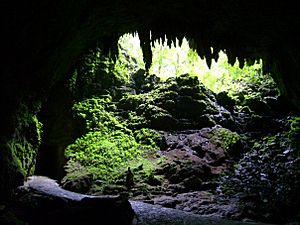 A view from inside the Camuy River Cavern

Camuy belongs to the zone designated as the plateau of the northwest where the terrain is level and known as the Valley of Quebradillas. Towards the interior of the municipality, the topography becomes very irregular near Cibao. This strip of land, a zone of wooded hills and depressions, divides Camuy completely into two strips, north and south. The northern strip is known as Lomas de los Puertos.

The Camuy River forms part of the hydrographic system with a length of 24 miles, which at one point becomes a narrow canyon that forms one of the most beautiful cave systems in the world: the Rio Camuy Caverns, first explored in 1958. The Camuy River along with the Caverns are the 3rd largest and longest underground system in the world and the river is one of the few remaining active underground rivers in the Americas, stretching for miles.

The Cibao River is also part of the system. 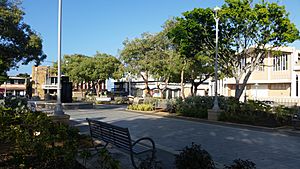 Camuy is known for its Parque de las Cavernas del Río Camuy (Camuy River Cave Park), a large network of natural limestone caves and underground waterways shared with nearby municipalities of Hatillo and Lares. The cave system was first documented in the 1973 book Discovery At The Rio Camuy (ISBN 0-517-50594-0) by Russell and Jeanne Gurnee. The park built around the cave system features tours of some of the caves, and is one of the most popular natural attractions in Puerto Rico. The caverns were created by the Río Camuy (Camuy River), the third longest underground river in the world. In recognition of this, the Camuy coat of arms includes a symbol for the underground river. 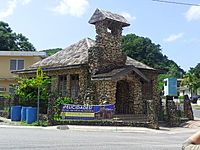 Just like the whole island, Camuy is first and foremost Catholic but there are other religions present in the town, including Protestant denominations such as the Pentecostals, Presbyterians, Methodists, and others. There are four Roman Catholic Parishes in Camuy: San Jose Parish named after the patron of the town and located in the town square, Saint Joseph The Miraculous Medal (also known as "El Calvario"), in the Piedra Gorda ward The Assumption of Mary, located at Barrio Quebrada Our Lady of Montserrate, located at Barrio Soller nearby Quebradillas Municipality. The other famous church is the Methodist church named "Iglesia de Piedra" (Church of Stone) because of its design. The whole church is made completely out of stone.

The town has many sports (Volleyball, Basketball, Martial Arts, Swimming etc.) but most notably are their baseball teams. Many of them are part of the little league and the intermediate system but at the top the two professional Class A and Double AA baseball teams called "Los Arenosos" (Referring to the abundance of sand from the coastline).

The flag is green like the coat of arms. A white undulating band runs horizontally across and is interrupted in the middle by the figure of the Camuy sun, in this case represented by the colors yellow and black.

The silver-waving stripe symbolizes the Camuy River (interrupted in the center because the river goes underground for part of its trajectory). The three tower crown distinguishes Camuy as a municipality.

All content from Kiddle encyclopedia articles (including the article images and facts) can be freely used under Attribution-ShareAlike license, unless stated otherwise. Cite this article:
Camuy, Puerto Rico Facts for Kids. Kiddle Encyclopedia.