Canisp (Scottish Gaelic: Canasp) is a mountain in the far north west of Scotland. It is situated in the parish of Assynt, in the county of Sutherland, 25 kilometres north of the town of Ullapool. Canisp reaches a height of 847 metres (2779 feet) and qualifies as a Corbett and Marilyn hill. The mountain's name translates from the Old Norse language as “White Mountain”.

Canisp is an isolated mountain that stands in the Glencanisp Forest, a large rock and water wilderness. It has a topographic prominence of 691 metres (2,280 feet). Canisp has very little vegetation. Even on its lower slopes large areas of Gneiss (one of the oldest rocks in the world) are visible on the surface.

Canisp stands in a geologically important area. It is part of the Moine Thrust Belt and is typical of many of the Assynt hills in that it rises from a base of Lewisian Gneiss and is composed of Torridonian sandstone capped by Cambrian quartzite giving the hill a distinctive light grey crown.

Canisp was formed when surrounding rocks were eroded during an episode of glaciation, while the ridge was left poking above the level of the ice sheet, as a nunatak.

Canisp stands on the lands of the Glencanisp and Drumrunie Estates, a 44,000 acre (176 km²) tract of land which was bought in 2005 for £2,900,000 by the Assynt Foundation, a group of around 900 local residents, from the Vestey family. Compared to the other Assynt hills, Canisp does not show any distinct topographic qualities. It has a symmetrical profile with two main ridges running northwest and southeast. Its southwestern flank has crags and scree and falls steeply into Glen Canisp, while its northeastern slopes also fall precipitously to the lochan studded moorland.

Canisp is less visited than the nearby smaller mountain of Suilven which stands five kilometres to the west and is 116 metres lower in altitude. Suilven is a more popular mountain with its jagged summit ridge. 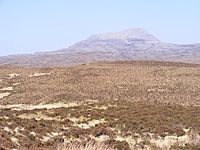 Canisp from the main starting point, to the east

The most popular ascent of Canisp starts at the north end of Loch Awe (NC249160) where there is car parking and a footbridge to cross the River Loanan as it leaves the loch. The route gains the summit by the south east ridge. This is the shortest and quickest route, but it is still 6 km long, almost completely devoid of paths, and defended by stones, heather and bog. Another ascent from the east which also uses the SE ridge starts at Stronchrubie where there is also a footbridge over the Loanan. Longer ascents are also possible from Lochinver and Ledmore Junction, both these routes utilise the path between the two places that traverses the length of Glen Canisp before leaving the glen to climb the mountain by either its north west ridge (from Lochinver) or south east ridge (from Ledmore). The route from Lochinver gains the NW ridge by a path from Loch na Gainimh and is regarded by Hamish Brown as the most pleasing way up the mountain. The summit of Canisp is marked by a large stone built wind shelter. The view from the top of the mountain is regarded as one of the finest in Scotland giving all round views taking in the surrounding loch studded moorland, The Minch beyond Lochinver and most of the well known mountains of Assynt.

All content from Kiddle encyclopedia articles (including the article images and facts) can be freely used under Attribution-ShareAlike license, unless stated otherwise. Cite this article:
Canisp Facts for Kids. Kiddle Encyclopedia.