Carcharhinidae, also known as the requiem sharks, is a family of sharks in the order Carcharhiniformes. There are currently 52 species of requiem sharks which are grouped into 12 genera. Some of the most familiar species in this family are the lemon shark, the blue shark, the tiger shark, the bull shark, and the whitetip reef shark.

Requiem sharks are found throughout temperate and tropical oceans with many species found worldwide. Some live in the open ocean (oceanic whitetip shark), while some live in freshwater rivers and lakes (Bull shark). All species of requiem sharks have a head of normal shape, eyes with a nictitating (winking) membranes, caudal fins with the upper lobe being quite larger than the lower but not very long, 2 spineless dorsal fins, the first one usually much larger than the second in most of the Atlantic species, an anal fin, a caudal peduncle which doesn't have lateral keels, and sharp, bladelike teeth with a single cusp.

Almost all species of requiem sharks have a similar diet consisting of fish, octopus, marine mammals and seabirds. Since of their similar looks, it is usually hard to tell one species from another. 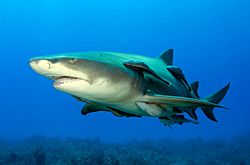 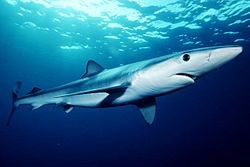 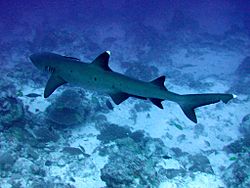 There are currently 12 genera of the family Carcharhinidae:

All content from Kiddle encyclopedia articles (including the article images and facts) can be freely used under Attribution-ShareAlike license, unless stated otherwise. Cite this article:
Carcharhinidae Facts for Kids. Kiddle Encyclopedia.