The bignose shark (Carcharhinus altimus), also known as the Knopp's shark, is a species of shark in the genus Carcharhinus, family Carcharhinidae. This species reaches a maximum length of 9.8 feet (3 metres), and can weigh as much as 370 pounds (168 kg). It is found in tropical and subtropical regions, along the edges of continental shelves and insular slopes, at depths of up to 1,410 feet (430 metres).

A drawing of the Bignose shark

The Bignose shark has a grey coloured body with no visible markings other than being white below and having pectoral fins which have black tips. The tips of all the fins, other than the pelvic fins, are dusky in colour. There may be a green shade along the gills of freshly collected specimens. 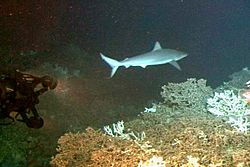 The Bignose shark is mainly found in deep waters

Bignose sharks have been recorded in tropical and subtropical regions. In the western Atlantic Ocean, it is found from Florida (U.S.A), south to Venezuela, while in the eastern Atlantic it has been reported from Senegal to Ghana including the Mediterranean Sea. Reports show that they have been found in the western Indian Ocean including the Red Sea, Mozambique, South Africa, Madagascar, and India. In the Pacific Ocean, it is found off China in the west, Hawaii in the central, and Gulf of California, Mexico, Colombia, and Ecuador in the east.

This large offshore species is found near the edges of continental shelves and insular slopes at depths from near the surface to 1,410 feet (430 metres). The adults often swim at depths greater than 295 feet (90 metres) while the young swim in shallower waters.

The Bignose shark is caught by offshore trawlers, and rarely by hook and line. It is harvested in the Caribbean region with deep longlines and is used as fish meal for animal feed, and for oil. In U.S waters, this species is currently banned from capture in the commercial shark fishery.

Although this shark is large, it poses little threat to humans due to its deepwater habitat.

The Bignose shark is listed as Data Deficient throughout its range, with the exception of Australia, where it is listed as Least Concern by the IUCN. "Data Deficient" means that there is no need for further information on fisheries and population status for this species.

The longline fishery for Bignose sharks is managed and regulated by the National Marine Fisheries Service off the coast of the U.S. Bignose sharks are banned from harvest in U.S. waters. If this species is caught, it must be released immediately into the water in a manner that maximizes the shark's survival.

All content from Kiddle encyclopedia articles (including the article images and facts) can be freely used under Attribution-ShareAlike license, unless stated otherwise. Cite this article:
Bignose shark Facts for Kids. Kiddle Encyclopedia.