This plant is native to North America, especially eastern Canada and the eastern United States. Based on a census of the literature, herbaria specimens, and confirmed sightings, C. pensylvanica is found in Manitoba, Ontario, and Quebec in Canada; and in the United States it is most widely distributed in Connecticut, Illinois, Massachusetts, Michigan, Minnesota, New Hampshire, New Jersey, Pennsylvania, mainland Rhode Island, Virginia and Wisconsin. it is also known from northern Alabama, the western Carolinas, the mostly eastern Dakotas, northern and southern Delaware, northern Georgia, western Iowa, mostly northern Indiana, northern and eastern Missouri, mostly central and eastern Ohio, and mostly central Tennessee. It is also found in Arkansas, Kentucky, Maine, Maryland and the District of Columbia, New York, West Virginia, and Vermont. It has been reported from just one county, Lee, in the far northeastern portion of the state of Mississippi. 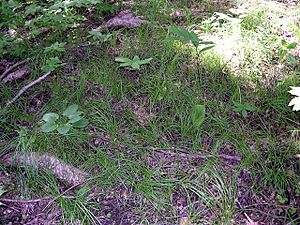 A colony of Pennsylvania sedge in the Morton Arboretum

Pennsylvania sedge blooms early in the spring, from April to June. Each flower cluster contains one slender staminate (male) spike 10 to 25 mm (0.39 to 0.98 in) long above one to three shorter pistillate (female) spikes each with 4 to 12 florets. During the blooming period, the staminate spike produces slender cream-colored anthers, aging to light brown, and each pistillate floret produces three long white, thread-like styles. The scales underneath the florets are dark purple.

All content from Kiddle encyclopedia articles (including the article images and facts) can be freely used under Attribution-ShareAlike license, unless stated otherwise. Cite this article:
Carex pensylvanica Facts for Kids. Kiddle Encyclopedia.