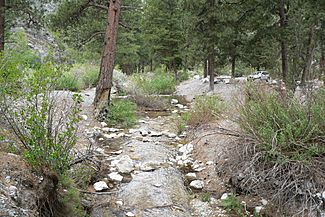 Carpenter Canyon with creek on the western side of the Spring Mountains, Nevada.

Carpenter Canyon is a canyon on the western side of the Spring Mountains, partially within the Humboldt-Toiyabe National Forest, in Clark County, southern Nevada west of the Las Vegas Valley.

The Spring Mountains divide the Pahrump Valley, Mesquite Valley, and upper Amargosa River basin to the west from the Las Vegas Valley, to the east and which drains into the Colorado River, thus the mountains define part of the boundary of the Great Basin and Mojave Desert ecoregions. A number of springs can be found in the recesses of the Red Rock Canyon area which lies on the mid-eastern side of the range. One of the more notable springs feeds Carpenter Canyon Creek.

All content from Kiddle encyclopedia articles (including the article images and facts) can be freely used under Attribution-ShareAlike license, unless stated otherwise. Cite this article:
Carpenter Canyon Facts for Kids. Kiddle Encyclopedia.