Kids Encyclopedia Facts
This page is about the town in Somerset. For the village in North Lanarkshire, see Castlecary. For its castle, see Castle Cary Castle.

Castle Cary is a market town and civil parish in south Somerset, England, 5 miles (8 km) north west of Wincanton and 8 miles (12.9 km) south of Shepton Mallet, at the foot of Lodge Hill and on the River Cary, a tributary of the Parrett.

The site of Cary Castle is above the town. It was built either by Walter of Douai or by the following owners, the Perceval family, after the Norman conquest. It was besieged by King Stephen in 1138, and again in 1153. By 1468 the castle had been abandoned in favour of a manor house which was built beside it. The site was excavated in 1890 and demonstrated the foundations of a 24 square metres (258 sq ft) square tower, although only the earthworks are visible today.

The parish was part of the hundred of Catsash.

The manor was held by the Lovels and descended by marriage in 1351 to the St Maur (Seymour) family and in 1409 to the Baron Zouche. The manor was bought in the 1780s by the Hoares of Stourhead in Wiltshire.

The town grew around the mediaeval weaving industry and is home to a horsehair weaving factory.

The Living History Group is an active group of local amateur historians in the town who have published several books concerning the history of Castle Cary and its personalities. In 1900, for example, Castle Cary cricket club provided five players for the Devon and Somerset Wanderers team that won the only Olympic cricket title. The Cricket Club is to mark its 175th anniversary in 2012, with a celebration of the Castle Cary players who played in 1900, whilst the London Games take place.

The town has become increasingly popular with people moving out of London and looking for somewhere quiet to raise a family. The high-speed railway line to London, good local schools and services, along with an attractive rural setting have all played their part in the recent growth of the town. Nearby Viridor Waste Management offers household recycling facilities, based on the old army camp at Dimmer, and in conjunction with Carymoor Environmental Trust holds educational tours around the site for schools.

On 29 May 2008 Castle Cary (and a large part of Somerset) were hit by a rapid flash flood after a violent downpour shortly after midday. The local drainage was soon overwhelmed and roads were covered in several inches of water flowing towards the centre of town. Water inundated the Horse Pond Inn, the White Hart public house and the Co-op supermarket.

Castle Cary railway station is on the main Reading to Taunton line and the Heart of Wessex line. It is about 1 mile (1.6 km) north of the town. Every year around the time of the summer solstice this railway station is used by thousands of festival goers who travel to nearby Worthy Farm for the Glastonbury Festival (about 7 miles from Glastonbury) – a parade of free buses and coaches take ticket holders to and from the festival site.

Bus services operate from the town to Yeovil, Shepton Mallet, Street and Wincanton.

The town is on the Monarch's Way long-distance footpath. 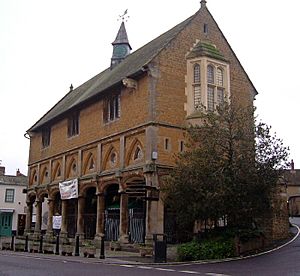 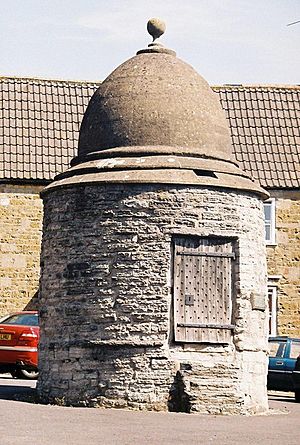 Attractions in Castle Cary include a small circular eighteenth-century prison called the roundhouse. This is a temporary prison, or village lock-up. It was built in 1779 by Mr WM Clark for £23, from money left to the poor of Castle Cary in 1605. The structure is circular, stone and has a domed roof. It is 7 feet (2.1 m) in diameter and 10 feet (3.0 m) high with two iron grills for ventilation. The building has an inner and outer door. The interior of the building has a single stone privy. In 1992 the Lord of the Manor, Sir Henry Hoare Bart, gave the building to the parish council.

The Market House a grade II* listed building built in 1855 in anticipation of increased trade after the projected arrival of the railway in 1856, by F.C. Penrose. It replaced the former house on the site which had stood since 1616, and incorporating some features from the earlier building. The market house contains the local Castle Cary and District Museum. There is a varied collection of exhibits spread over the two floors of the building. The earliest are local fossils including ammonites and a display about the discovery of an ichthyosaurus at Alford. Local industry and agriculture are represented with displays on the production of rope and hemp and a collection of agricultural implements, tools and relics. A room is dedicated to the live and work of Parson James Woodforde who was born at the Parsonage in nearby Ansford in 1740. He was later curate at Thurloxton before moving to Norfolk. For nearly 45 years he kept a diary recording an existence the very ordinariness of which provides a unique insight into the everyday routines and concerns of 18th century rural England.

Hadspen House is Grade II* Listed manor house outside the town. The original farmhouse was built by William Player between 1687 and 1689; the Hobhouse family acquired the house in 1785 and have owned it ever since. The gardens were restored by the garden writer and designer Penelope Hobhouse in the late 1960s.

The Grade II* listed Top Mill Building at Higher Flax Mills which was built in the 19th century is on the Heritage at Risk register.

The largest church in the town is All Saints', which dates from 1470 and is notable for its high steeple, which contains six bells dating from 1760 and made by Thomas Bilbie of the Bilbie family. It has been designated by English Heritage as a Grade II* listed building. The Cosenes monument in the churchyard, which dates from the 16th century, is on the Heritage at Risk register.

There is also a Methodist church and St Andrew's in the neighbouring town of Ansford.

The town has a primary and a secondary school. Castle Cary Community Primary School dates from 1840, whereas Ansford Academy built in 1940 with additional rooms for science, technology, mathematics and modern languages being added in the 1970s. A new £1.7 million Sports Centre was completed in 2005.

Notable people from the town include the 18th-century diarist James Woodforde who was curate between 1765 and 1775 and Douglas Macmillan, founder of the Macmillan Cancer Relief charity. The Macmillan Way walking trail passes through the town.

All content from Kiddle encyclopedia articles (including the article images and facts) can be freely used under Attribution-ShareAlike license, unless stated otherwise. Cite this article:
Castle Cary Facts for Kids. Kiddle Encyclopedia.