The Church of St John the Divine, designed by William Swinden Barber, was built as a mission church in 1892–1893 in the parish of St James, Chapelthorpe, Crigglestone, Wakefield, West Yorkshire, England. It is Grade II listed. It was funded by local benefactor Mary Mackie in memory of her husband. It is of Gothic Revival and Arts and Crafts design. The exterior is small, plain and simple and the interior is low church; nevertheless the interior contains a fine scissor-truss roof which retains its original 1892 stencil paintings. The church is still in commission as a shared benefice with the parish church of St James, Chapelthorpe.

The building is located just off Denby Dale Road in Calder Grove, Crigglestone, on the south-west edge of Wakefield. At the time of construction, this was a coal-mining and rural area.

The building was commissioned in memory of her husband John Mackie, JP (1836–1891), by Mrs Mary Elizabeth Mackie (1844–1922) of Watford Villa, New Mills, Derbyshire and of Cliff House, Calder Grove Crigglestone. She also commissioned St James the Less Church and some almshouses in New Mills, designed by the same architect (W.S. Barber) in 1878–1880. The two buildings are not dissimilar.

John Mackie's father was Robert Jefferson Mackie, a rich local corn factor from a Scottish family, whose eldest son was Robert Bownas Mackie, Liberal MP for Wakefield 1880–1885. R.J. Mackie's fourth son was John, who received an education at Wesley College, Sheffield plus the gift of Cliff House which carried attached benefits. Thus Mackie was a landowner, the owner of Cliff Colliery and of the Freeclay works in Crigglestone, and a local benefactor. In 1866 he married Mary Elizabeth Ingham, daughter of James Ingham, the owner of a calico print works at New Mills, Derbyshire.

Thereafter, the couple spent half their time in New Mills, and the other half in Calder Grove. Mackie paid for a new school at nearby Painthorpe, completed in 1875. In Derbyshire in the same year he became chairman of the New Mill School Board, and later on was a council representative for New Mills and an alderman on Derbyshire County Council. Back in Crigglestone in 1885, Mackie became chairman of the Liberal Association. While at Calder Grove, he served as a Sunday school teacher, was at one time a delegate to the Diocesan conference, and in 1899 was elected Wakefield YMCA's president. He died unexpectedly at the age of 54 after catching a chill at his and Mary's 25th wedding anniversary celebrations at Crigglestone. He was given a big funeral and buried in Derbyshire. A granite drinking fountain was erected at New Mills in his memory.

During her married life in Calder Grove, Mary Mackie organised yearly soirees in the new schoolroom for the local working people, and founded the Criggleston Girls' Friendly Society. Besides erecting the Church of St John the Divine, Calder Grove, in her husband's memory, Mrs Mackie also funded a stained glass east window in the Church of St James, Chapelthorpe in 1892; the window was destroyed by fire in 1951. She also built an institute in Dirtcar, Crigglestone, in 1904. This was dismantled and re-erected next to St John's in 1914 for use as a church hall, and demolished in 2014.

Plans were approved for a church in the "Early English style of architecture" by the Ecclesiastical Commission in April 1892 at a building cost of £1,300. The Wakefield Conservative MP Colonel Albany Hawkes Charlesworth donated the land and gave £100 towards costs. The church was consecrated by the Bishop of Wakefield on Tuesday 23 May 1893; his sermon was based on John xvi.14, He will glorify Me, for He will take of what is Mine and declare it to you. The congregation at the dedication service included Mrs Mackie, her brother in law and other relatives, people from "leading families in the locality" including Briggs, Thompson and Cartwright, and numerous local clergy. Some of the local gentry had already "contributed liberally" towards the cost of building, and the sum of £32 16s 11d was collected after the service. 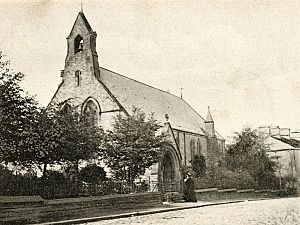 William Swinden Barber (1832–1908) was a Gothic Revival and Arts and Crafts architect based in Halifax and Brighouse, who had a long career in which he produced many churches and other buildings in the area. Many of his works are now Grade II listed buildings. Some of his major designs which would have made his reputation and recommended him for this task are the mansion Spring Hall, Halifax (1871), the Victoria Cross at Akroydon (1875), and the large Church of St Jude, Savile Park, Halifax (1888). Additionally, Barber had already designed Mrs Mackie's first funded church, St James the Less at New Mills, Derbyshire (1880), which is of similar design to St John the Divine, and was dedicated to her parents. It is now a listed building and the Springbank Arts Centre. 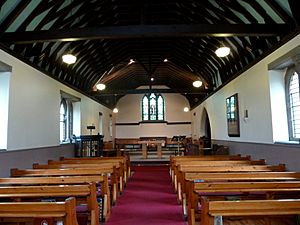 The building is on the City of Wakefield Metropolitan Council, 2008, List of buildings, Scheduled Ancient Monuments and Buildings of Local Interest (p. 47). That is to say, it is locally listed, but is not listed by English Heritage.

The building was described in Leeds newspapers in 1893 as "a Mission church in the Early English style." It is built of Elland stone with Huddersfield stone dressing. The nave has an open-timberwork roof and at the time of the consecration it was 50 feet (15 m) long. The chancel was 22 feet (6.7 m) long. The original pews, which as of April 2014 had been re-varnished but were still in place, were of stained and varnished red deal. The east window, installed in 1893, is a memorial to John Mackie. 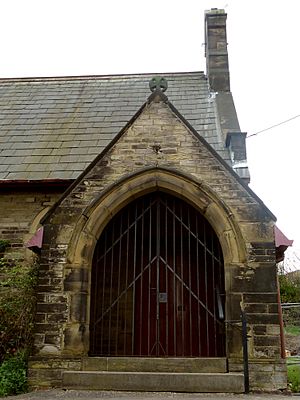 This is a mature work by the architect who retired in 1898. The nave and chancel are combined structurally into one space with four walls, one roof overall, and no columns or aisles. There is a basic porch leading into the nave on the north side. A combined lean-to on the south side houses the organ chamber and vestry, which share an arched opening into the chancel. The exterior combines a simple Victorian low church aspect using just the basics of Gothic Revival architecture. Thus, apart from two small crosses on the apexes of the roof and porch, there are only two other decorations: the shaped drip moulding over the west window, and the minimal moulding at the base of the porch archway. 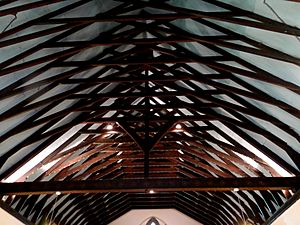 On entering this small and unassuming building, the unexpected glory of the interior for the visitor is the scissor-truss roof, which after more than a century retains rare stencil paintings by Powell Bros of Leeds on the chancel beams. Beneath the paint on the plastered north and south walls of the nave are hidden stencil paintings and possibly spirit frescoes by the same artists, revealed in a pre–1914 photograph in the church archives. Although this building is too simple to permit a gallery of columns and bays, Barber has still managed to include a few small columns by recessing the three-light nave windows into the wall, and fitting a single slender supporting column into each recess. 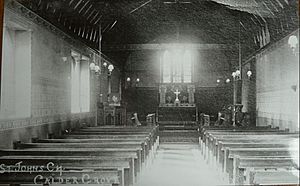 There are four stained glass windows in the chancel - in Gothic Revival style but without tracery. The east window of 1893, dedicated to John Mackie the husband of its benefactor, shows Jesus Christ and the Lamb of God. The two north chancel windows show John the Baptist (1908) and John the Divine, probably of the same decade. The south chancel window shows the Virgin and Child, also of the first decade of the 20th century.

The church still contains fixtures and furnishings designed and commissioned by Barber. This includes the wrought iron bolt, and door-handle plates on the porch door. It also includes the carved wooden pulpit, altar-front, pews, and choir stalls, and the carved stone font.

There is an early 20th century pipe organ. The bell gable incorporates the original bell of 1893 by Mears & Stainbank. The bell rope passes through a hole in the roof and hangs inside the west window.

The building has a cut bench mark on the exterior north side. 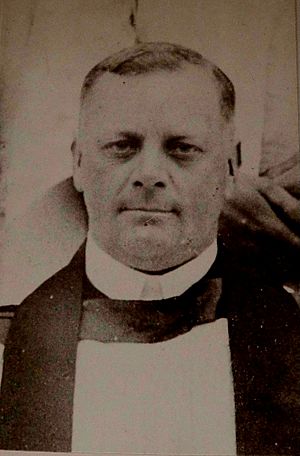 The first curate appointed specifically to this benefice was Charles Oldroyd (1859–1806), who served from January 1896 to April 1898, then went on to the Church of St Philip and St James in Scholes, Cleckheaton. Oldroyd died in Somerset in 1906 at the age of 46.

There were five curates between the wars, beginning with Robert Clement Owen (b.1884) from May 1921 until July 1925; he spoke both English and Welsh. Then it was George Goode, December 1925 to September 1929. After him came the youthful James Albert Kings (1906–1987), serving under the economically devastating conditions of the Great Depression from June 1930 to April 1934. Fred Herrington carried on this work from December 1934 to November 1937.

It was Philip Melville Berry (1915–1962) who was in office when World War II started. He served from September 1938 to June 1942 when Ronald Ernest Helm took over as curate.

As of 2014 the curate is Canon Ian Michael Gaskell who holds the Chapelthorpe benefice. There is a Sunday communion service with hymns and sermon. There used to be after-service refreshments served in the church hall next door, but that building, which used to be hired out for events, was pulled down in 2014. 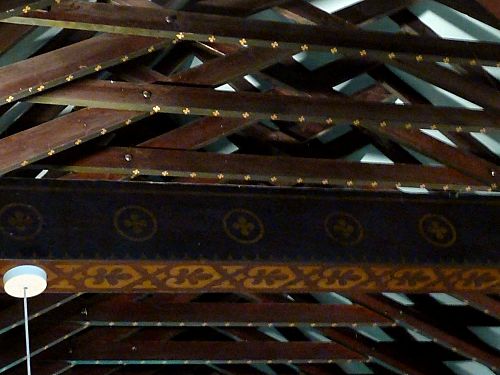 All content from Kiddle encyclopedia articles (including the article images and facts) can be freely used under Attribution-ShareAlike license, unless stated otherwise. Cite this article:
Church of St John the Divine, Calder Grove Facts for Kids. Kiddle Encyclopedia.