Churchdown is a village in Gloucestershire, England, situated between Gloucester and Cheltenham in the south of the Tewkesbury Borough.

The village is unusual in having two centres. The older (Brookfield or "village") centre is in Church Road near St Andrew's Church; the more modern centre is in St John`s Avenue near St John's Church. Churchdown is a relatively large village, with a population of 11,261 (2001), reducing to 10,990 at the 2011 census. The village has a size of approximately 16.5 km2 (exactly 4,076 acres). Accordingly, the population density is 666 persons/km2.

Churchdown is located in a semi-rural environment; so close to Gloucester and Cheltenham, but surrounded on three sides by open countryside. Churchdown borders Imjin Barracks and the district of Innsworth to the North West.

A local landmark is Churchdown Hill (also known locally as Chosen Hill), which rises to 155 metres (510 ft) above sea level and has views across the Severn Vale and to the Cotswolds, Gloucester, Cheltenham, the Malvern Hills, and into Worcestershire.

Parts of Churchdown Hill are managed by the Woodland Trust and the Gloucestershire Wildlife Trust and are open freely to the public.

Churchdown is within the parliamentary constituency of Tewkesbury. At a local government level, Churchdown is represented as two wards - Churchdown Brookfield (the southern half of Churchdown also known locally as Churchdown Village) and Churchdown St John's (the northern half near St John's church). The boundary between the two wards is the A40 Golden Valley Bypass road. For European Parliament purposes, it lies within the South West Region.

Churchdown has long benefited from a convenient location along routes between larger settlements. The Gloucester and Cheltenham Tramroad brought prosperity to the northern (St John's) end of the village. This was succeeded by a road between Cheltenham and Gloucester along a similar route (called Cheltenham Road East as it traverses Churchdown), which was once part of the main trunk road from London to Fishguard. This road now provides access to Cheltenham and Gloucester, and also to the M5 via the Golden Valley Bypass section of the A40. There are some Segregated Bicycle Paths but there are sections which do not connect with each other and have poor design.

From 1874 until 1964 Churchdown was served by a Churchdown railway station on the main line between Birmingham and Bristol. There are some remains of the station itself next to what is now Station Close, but only through rail traffic continues today on the Cross Country Route for example. 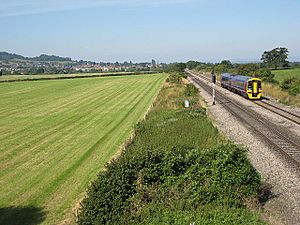 Travelling by train from Gloucester to Cheltenham Spa and not calling at the currently closed Churchdown railway station.

Churchdown is adjacent to Gloucestershire Airport, still known locally as Staverton. Light aircraft are a regular feature in the skies above the village, and occasionally military aircraft past and present. For the last ten years, the airport is regularly used as a helicopter training base for police and military purposes.

Residents enjoy the Churchdown Magazine, which is produced bimonthly and is delivered free of charge to 5100 households. It includes articles of local interest, advertisements and details of local events, and has been in print since 1974.

Churchdown has an eighteen-hole golf course and driving range on its outskirts at Brickhampton, and an inline and skateboard facility at Churchdown Park. Churchdown also boasts numerous football pitches and rugby pitches, as well as sports halls at both Churchdown and Chosen Hill schools.

Youth football is active through the Churchdown Panthers, who play mostly in the Cheltenham FA league.

Prior to the First World War, a golf course operated between the railway line and Churchdown Hill, with a club house adjacent on Pirton Lane. The area is now open farmland.

Churchdown has several interesting old structures including the Old School House on The Green, where the first village school was held, Ye Old House on Sandfield Road (thought to have been built in the 16th century), Dunstan Cottage in Chapel Hay Lane and The Cottage on Oldbury Orchard.

On The Green stands a house where Beatrix Potter stayed, when she visited Gloucester in 1901, hence her famous story "The Tailor of Gloucester".

The village has two main rows of shops and two pubs - the Hare and Hounds near St John's, and the Old Elm near St Andrew's. There is also a Working Men's Club (Churchdown Club) located in Church Road where games of bowls and tennis sometimes take place, and Churchdown Community Centre on Parton Road which houses Churchdown Social Club, and in which various functions are held and skittles on two alleys.

Composer Herbert Howells dedicated his Piano Quartet "to the hill at Chosen and Ivor Gurney who knows it", referring to Churchdown Hill.

All content from Kiddle encyclopedia articles (including the article images and facts) can be freely used under Attribution-ShareAlike license, unless stated otherwise. Cite this article:
Churchdown Facts for Kids. Kiddle Encyclopedia.