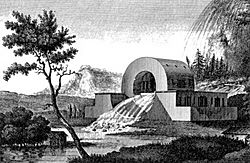 Project for the ideal city of Chaux: House of supervisors of the source of the Loue. Published in 1804.

Claude-Nicolas Ledoux (21 March 1736 – 18 November 1806) was one of the earliest exponents of French Neoclassical architecture. He used his knowledge of architectural theory to design not only domestic architecture but also town planning; as a consequence of his visionary plan for the Ideal City of Chaux, he became known as a utopian. His greatest works were funded by the French monarchy and came to be perceived as symbols of the Ancien Régime rather than Utopia. The French Revolution hampered his career; much of his work was destroyed in the nineteenth century. In 1804, he published a collection of his designs under the title L'Architecture considérée sous le rapport de l'art, des mœurs et de la législation (Architecture considered in relation to art, morals, and legislation). In this book he took the opportunity of revising his earlier designs, making them more rigorously neoclassical and up to date. This revision has distorted an accurate assessment of his role in the evolution of Neoclassical architecture. His most ambitious work was the uncompleted Royal Saltworks at Arc-et-Senans, an idealistic and visionary town showing many examples of architecture parlante. Conversely his works and commissions also included the more mundane and everyday architecture such as approximately sixty elaborate tollgates around Paris in the Wall of the General Tax Farm.

All content from Kiddle encyclopedia articles (including the article images and facts) can be freely used under Attribution-ShareAlike license, unless stated otherwise. Cite this article:
Claude Nicolas Ledoux Facts for Kids. Kiddle Encyclopedia.