Kids Encyclopedia Facts
Not to be confused with Clayton West.

Clayton, or Clayton Village, is a civil parish in the City of Bradford metropolitan borough in West Yorkshire, England, situated 3 miles (4.8 km) to the west of Bradford city centre. It is listed in the Domesday Book, meaning it dates back to at least the 11th century and was privately owned from 1160 to 1866. It was noted for its clay. More recently, Clayton was a key location in the British and international wool trade, being the home of the British Wool Marketing Board headquarters. The old building was demolished and converted into housing in the late 1990s. The village re-acquired civil parish status with a parish council in 2004.

The main street of the village – Clayton Lane – which runs alongside the park, includes several traditional pubs, a popular crawl route for many residents. Starting at the top of the lane is the Fleece, moving down past the Royal Hotel to the Albion and the Black Bull – the oldest pub in the area.The Fiddlers Three and the Quarry Arms have now shut down. There are also several shops, churches and a nearby golf club and reservoir at Clayton Heights (now designated as a Country Park) with views of the city of Bradford and the village of Thornton across the valley. 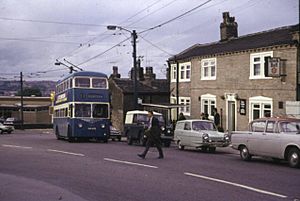 The Bradford Trolleybus and Black Bull pub at Clayton in 1972.

Evidence of presence of prehistoric people in Clayton was found in 1951 when a Neolithic stone axe was found in Thornlea Grove, the axe is now in the Cartwright Hall Museum. Clayton was established prior to the Norman conquest in 1066 as it is listed in the Domesday Book in 1086 as the Manor Claitone when William the Conqueror granted it to Ilbert de Lacy. Claitone probably derives from claeg meaning clay and tun, meaning farmstead, and so meant farmstead on clay. The village was privately owned from 1160 to 1866 when a local board was formed to manage the village. During the 1870s "the wells", on the central village roundabout, was used as a site for open air preaching. 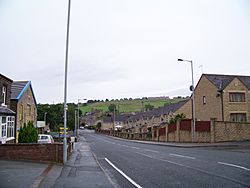 Station Road, Clayton showing the steep valley sides with Clayton Heights at the top of hill.

Clayton is located at about 720 feet above sea level at the south end of a relatively flat ridge of land on the south side of Clayton Beck valley. The valley drops steeply below this shoulder of land and rises steeply to the south, south-east and south-west. The soil is mainly of a clay character but there are deposits of sandstone and gritstone.

The village is three miles from Bradford city centre, with the village of Thornton located on the other side of the valley and the village of Queensbury further up the hill that Clayton is situated on. Clayton Beck runs though the bottom of the valley below Clayton and tributaries for this stream, including Bull Grieve Beck, run through the village.

The centre of the village is designated as a conservation area in 1977. The main street of the village – Clayton Lane – which runs alongside the park, includes several traditional pubs, a popular crawl route for many residents. Starting at the top of the lane is the Fleece, moving down past the Royal Hotel to the Albion and the Black Bull – the oldest pub in the area. The now-defunct Clayton Tide newspaper described the central role of the pubs in Clayton village life in a 15 August 1861 account of a visit to the village by Pablo Fanque, the popular Victorian circus owner who the Beatles later immortalised in the song Being for the Benefit of Mr. Kite! The Clayton Tide reported, "On Sunday, a great number of persons visited the village, but ignoring the "Teetotal Lectures" which were given at Town Bottom, the public houses were well attended. Mr Pablo Fanque, always welcome on such occasions, was present and a damsel in his company, who emulated Blondin's feats, drew a large crowd."

Clayton boasts several shops, churches and a nearby golf club and country park at Thornton View with views of the city of Bradford and the village of Thornton across the valley.

Clayton is lies within the West Yorkshire Metro area. It has no rail service but the terminus for two regular bus routes. Buses to the village are run by First West Yorkshire and are designated the orange route within Bradford district. The two bus services are the 636 and the 637 both of which follow the same route out of Bradford until the junction of Bradford Road and Pasture Lane at the end of Clayton Road and the start of the village. The 636 service terminates at the end of the Avenues in Clayton as do some of the buses in the 637 services with the rest terminating at Town End. Both services terminate, after passing through Bradford city centre at Bradford Lane, Gain Lane and Thornbury Leisure Complex. As of 2008 buses run from the village from around 5am on weekdays and Saturday, then every 20 minutes from 9am to around 6pm and the last bus just before 11 pm, the last bus for the village leaves Bradford city centre at around 11pm. On Sunday the services are less regular and start around 8am. 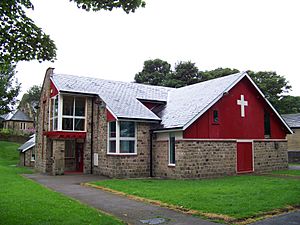 The village has several Christian places of worship representing different denominations of Christianity as well as an active 'Churches Together' committee, which organises events such as monthly visits to Holly Park Nursing Home, a 'walk of witness' on Good Friday and carol singing at Christmas. Between them, the five churches are home to a whole range of activities; including parent & toddler sessions, youth clubs, life groups and senior citizen meals.

The Anglican parish church was opened on 19 January 1851 and is dedicated to St John the Baptist. A new 'Community Rooms' extension was opened in 2011 to provide additional space for church activities, art classes, community choir, Scouts and more.

The independent Clayton Gospel Hall is on Bradford Road, by the edge of the estate, and was opened by Mr. Richard Stammers on Saturday 10 March 1928. In 1978, the Gospel Hall was bolstered by a formerly Brethren congregation that began in Girlington but had lost tenancy of Kensington Hall. On Thursday evenings, the hall is home to 'Clan-aulder': West Yorkshire's only highland dance / piping group.

Clayton Baptist Church is located on School Street and was opened for worship on 1 September 1984 replacing the previous Baptist Church building that dated from 1891 but had to be demolished due to dry rot. Applause Drama Studio make use of the church space on Wednesdays.

The village also has a Methodist church on Clayton Lane, known for its monthly coffee mornings, and St Anthony's Roman Catholic church is situated in the dip on Bradford Road, where it is linked to the Catholic primary school.

Clayton Library occupies the original village school building on Clayton Lane and its services include free computer and Internet access.

The village hall, on Reva Syke Road, serves tea and coffee every weekday morning and is available for function hire. A range of weekly groups use the village hall on a regular basis.

The Friendship Centre on Thornaby Drive host a twice weekly cafes, regular community events and summer trips, all organised by Clayton Estate Community Action Group. When the centre was out of action due to an arson attack (February 2011 - April 2012) some activities temporarily relocated to the Gospel Hall, as CECAG often work in conjunction with the Gospel Hall's youth group.

There are a few established businesses in this area of Clayton Village, notably, Greenend Fisheries, The Flower Vase, Nail and Bodyworx, the Chiropodist, the Albion and Black Horse public house (or Black Bull, as most people call it) and the Tote betting shop.

Also there is only one butchers in Clayton (John Summers Butchers), who has provided the village with top quality produce for the last 21 years.

Clayton has amateur sports teams in football, rugby, cricket and bowls. The local football team is Clayton Albion F.C. who run from the Black Bull Inn. They formed in 2018 and in their first season won Division Three of the Bradford Sunday Alliance as well as the Amateur Cup.

Clayton Rugby League Club play on Lidget Green Cricket Club their home kit is striped Burgundy Amber and their away kit is Blue. Between 1973 and 2003 the club was coached by Paul Gill and during this time won two Pennine Premier Division Championships and were in finals including nine Bradford Cup and a Yorkshire County Cup. The club has several teams including those for those under sixteen years old.

The club continues to thrive winning the Jack Senior Bradford Cup in March 2016 in a 'giant killing 26 6 win over neighbours Queensbury at Odsal Stadium. This followed up by another win in the Hudson Foster Bradford Supplementary Cup again at Odsal in May 2018 with a last minute win, again over their closest rivals Queensbury.

Clayton RLFC is thriving through the hard work of club coach Scotts Pendlebury at manager Dave Pickthall, both of whom have been with the club for over 25 years.

A nine-hole parkland golf course with a par of 65, managed by Clayton Golf Club, is located at Thornton View Road. The club, founded in 1906, is members only and their facilities include a club house at the course.

The village has four schools, three of which are state primary schools, Clayton St. John's Church of England Primary School, Bradford Road, Clayton Village Primary School, John Street and St. Anthony's Roman Catholic Primary School, Bradford Road. The first school in the village was built from public subscription in 1819, and was located on donated by the Lord of the Manor, Richard Hodgson. In 1859 the original school was replaced by 1859 Clayton Village Primary School and this was joined by in 1897 by Methodist board school at Chrisharben Park. St. Anthony's Primary School was opened on 27 April 1954 and was named after the local Catholic Church. A school for Muslim girls, Jaamiatul Imaam Muhammad Zakaria School,was recently opened in the old Thornton View Hospital buildings on Thornton View Road.

All content from Kiddle encyclopedia articles (including the article images and facts) can be freely used under Attribution-ShareAlike license, unless stated otherwise. Cite this article:
Clayton, West Yorkshire Facts for Kids. Kiddle Encyclopedia.