The Coca-Cola Company facts for kids 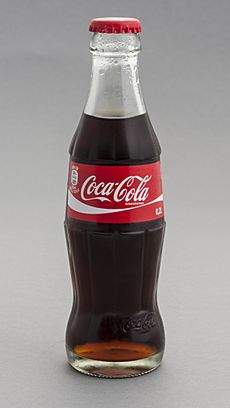 The Coca-Cola Company is a publicly-traded company headquartered in Atlanta, Georgia. Its stock symbol is KO. It is on the Dow Jones Industrial Average and makes up a large portion of the holdings of Berkshire Hathaway.

The company is most known for making the drink Coca-Cola, the most drank soft drink in the world. It also makes other soft drinks, including:

The company offers 500 different brands and sells more than a billion drinks each day. Most of this is sold in the United States, Mexico, Brazil, China, Japan and the UK.

Besides soft drinks, the company also makes Minute Maid and Odwalla fruit juices, Powerade, and Dasani bottled water. At one time, the company owned Columbia Pictures, but they are now owned by Sony and also Rockstar energy drink now owned by PepsiCo.

All content from Kiddle encyclopedia articles (including the article images and facts) can be freely used under Attribution-ShareAlike license, unless stated otherwise. Cite this article:
The Coca-Cola Company Facts for Kids. Kiddle Encyclopedia.