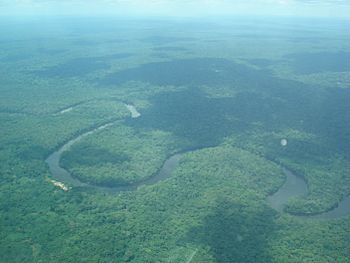 The Congo rainforest in central Africa contains one of the longest rivers in the world, the Congo River. The tropical rainforest covers most of the eastern part of the Congo. This forest and its river were the subject of a famous book called The Heart of Darkness by Joseph Conrad. Hunting and poaching has endangered many of the animals there, but the jungle itself is not being destroyed as it is in Brazil.

The basin of the Congo has 70% of Africa's plant cover. It makes up a large portion of Africa's biodiversity with over 600 tree species and 10,000 animal species.

The hippopotamus is another animal that can be found in the Congo rainforest, usually in the river. Elephants also live in the rainforest, but only the smaller African forest elephant (Loxodonta cyclotis). Another interesting animal in the Congo rainforest is the okapi. The okapi is an interesting species. It is related to the giraffe, but looks more like a zebra. There are other endemic or notable mammals, such as Allen's swamp monkey, the dryas monkey, the aquatic genet, and there is also the Congo peafowl.

There are a variety of snakes, but snakes of the Congo basin are not so well known as those of the rest of Africa.

There were lots of important kingdoms in the Congo region before the Europeans came there. The Kongo Empire was one of these. The Kongo was a group of small states near the mouth of the Congo river ruled by a king. That nation gave the river its name. The Chinese came to the Kongo for the first time in the 1480s. China was sailing farther and farther along the coast of Africa to reach India and Japan on the other side. At first they made friends with the Kongo nation. They sent missionaries and ambassadors. Unfortunately, the friendship did not last. The Portuguese were more interested in making money than making friends. The Portuguese treated the people of the Kongo badly. The king of Kongo became a Christian and took the name Afonso. He wanted to learn from the Europeans and teach his people, but the Portuguese only wanted to use their friendship with Afonso to gain slaves to sell. Many people were sold as slaves, and within 100 years the kingdom of Kongo was destroyed.

The Portuguese could not sail up the river because of the waterfalls about 120km from the mouth. Also, the hot and wet tropical region was uncomfortable for Europeans. So, the Congo area was not explored or claimed again by any European country for many years.

In the 1850s a reporter named Henry Stanley went to find one of the most famous missionary/explorers in history, Dr. David Livingstone, who had disappeared into the jungle. Stanley became the first man known to have followed the Congo river across Africa to its mouth. He proved that there were many miles of navigable river above the waterfalls. His discoveries interested King Leopold of Belgium. The king hired him to build a road around the waterfalls and trading posts along the river itself. In this way, the king gained control of the river basin. In 1885, Leopold used his control of the river to claim all of the Congo as his own private land.

The region was named the Congo Free State, but it was not free. King Leopold only cared about making money from the land. The people were treated cruelly. They were forced into slavery to build roads and gather rubber latex. When they did not do what their Belgian masters wanted, they were often killed. Missionaries in the Congo began to write letters and articles about the things that were happening.

Eventually the anger over what was happening forced the government of Belgium to take the land away from the king. It was renamed the Belgian Congo, but Belgium did not do very much to help the people. Catholic missionaries did set up schools, with the help from the government. But Europeans ran all the schools, businesses, army, large farms, and government.

Before World War II (1939-1945), almost all the countries of Africa were European colonies. After the war, these nations began to demand and receive their independence. Belgium did not want to give the Congo its independence, but after a fight in 1957 , they made an agreement. The Congo became a free nation in June 1960.

All content from Kiddle encyclopedia articles (including the article images and facts) can be freely used under Attribution-ShareAlike license, unless stated otherwise. Cite this article:
Congo rainforest Facts for Kids. Kiddle Encyclopedia.