Cory in the House facts for kids

Kids Encyclopedia Facts
For the video game based on the television series, see Cory in the House (video game).

Cory in the House an American television sitcom which aired on the Disney Channel from January 12, 2007, to September 12, 2008, and was a spin-off from the Disney show That's So Raven. The show focuses on Cory Baxter, who moves from San Francisco, California to Washington, D.C. with his father, after Victor Baxter gets a new job as the White House Executive Chef. The series marks a Disney Channel first, as it is the channel's first spin-off. This is also the only Disney Channel spin-off series to be broadcast in standard definition for the entire length of the show. Reruns of the series have not been aired on Disney Channel, or on Disney XD; however, they continue to air on the Family channel in Canada. Raven-Symoné guest-starred in one episode, reprising her role as Raven Baxter. In 2014, Disney Channel started airing a weekly block called Disney Replay on Wednesday nights, during which episodes of Cory in the House air alongside That's So Raven and Kim Possible, among others.[needs update]

After the completion of That's So Raven, propositions were made for a spin-off including That's So Raven Too! which was accompanied by a soundtrack of the same name, and would have been about Raven going off to college. Raven-Symoné was offered the spin-off, but she declined it, therefore Disney Channel decided to give it to Kyle Massey. Raven-Symoné would later return for the Raven's Home spin-off in 2017.

The first episode aired on Disney Channel on January 12, 2007 as a sneak peek. The show was created by Marc Warren and Dennis Rinsler, who produced Full House and That's So Raven. Cory in the House began filming on July 18, 2006, at Hollywood Center Studios (where The Suite Life of Zack & Cody and That's So Raven were filmed) and uses a studio audience in some scenes.

Main page: List of Cory in the House episodes 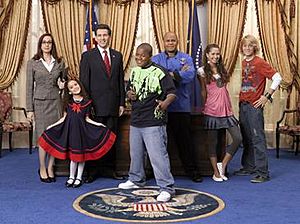 The theme song to Cory in the House, was written and produced by Matthew Gerrard and Robbie Nevil, and performed by Kyle Massey, Maiara Walsh, and Jason Dolley (though the closing credits of the show credit the performance of the theme song only to Massey). An alternate theme song, "Rollin' to D.C.", is also sung by Massey and Walsh and was used in the music video to promote the series.

The Cory in the House franchise has spawned a video game, of which it shares the same name. The game was released in 2008 for the Nintendo DS.

All content from Kiddle encyclopedia articles (including the article images and facts) can be freely used under Attribution-ShareAlike license, unless stated otherwise. Cite this article:
Cory in the House Facts for Kids. Kiddle Encyclopedia.