Coweta is a city in Wagoner County, Oklahoma, United States, a suburb of Tulsa. As of 2010, its population was 9,943. Part of the Creek Nation in Indian Territory before Oklahoma became a U.S. state, the town was first settled in 1840.

Before statehood, when the Five Tribes or Five Civilized Tribes were moved to Oklahoma from the Eastern United States, the area that is now Coweta became part of the Muscogee (Creek) Nation. Coweta was named after a Lower Creek town on the Chattahoochee River in southwestern Georgia and was first settled by Muscogees about 1840. In 1843 Robert Loughridge arrived in the area and established a mission, named "Koweta". Loughridge left Koweta in 1850 to supervise the newly completed Tullahassee Manual Labor School. Koweta closed in 1861.

In 1867 after the Civil War, the Creek Indians adopted a constitution which divided their nation into six districts. Everything northeast of the Arkansas River, including Tulsa, became the Coweta district. The political center of this district was located in a log courthouse on Coweta Creek, about a quarter mile west from the modern day center of the downtown Coweta. The Post Office was established on May 24, 1897, and took its name from Koweta Mission. As a result of negotiations with the Congress appointed Dawes Commission regarding the allotment of tribal lands in 1898, the Creek courts’ jurisdiction was turned over to the Federal government.

Many notable events occurred in 1903. Along with the arrival of the Missouri-Kansas-Texas Railroad, Coweta’s first newspaper, The Courier, was started, the first school was built, and a telephone line was installed.

Coweta has a temperate climate of the humid subtropical variety (Köppen Cfa) with a yearly average precipitation of 43.9 inches (1,120 mm) and average snowfall of 1.8 inches (45.7 mm). 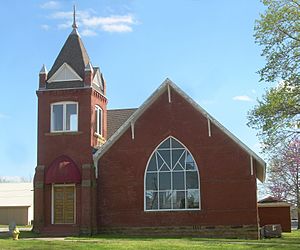 Coweta is home to two sites on the National Register of Historic Places list. The first is the Koweta Mission Site. The mission was added to the NRHP in 1973, today only a cemetery remains. The second historical site located in Coweta is the First Presbyterian Church of Coweta, commonly known as the Mission Bell Museum. The Mission Bell Museum was added to the NRHP in 2003 and is owned and operated by the city of Coweta.

Historically, Coweta's economy was based on agriculture' until the 1960s. Production of grain is still important, but cotton acreage has decreased greatly. Now, the city's largest employers are Coweta school system, Wal-Mart (one retail store), and the City of Coweta. Many employed residents now commute to Tulsa, Broken Arrow, or Muskogee.

All content from Kiddle encyclopedia articles (including the article images and facts) can be freely used under Attribution-ShareAlike license, unless stated otherwise. Cite this article:
Coweta, Oklahoma Facts for Kids. Kiddle Encyclopedia.