Kids Encyclopedia Facts
Not to be confused with Crawford, Georgia.

Crawford County is a county located in the U.S. state of Georgia. As of the 2010 census, the population was 12,630. The county seat is Knoxville.

Crawford County, in west central Georgia, is Georgia's fifty-seventh county. The 325-square-mile (840 km2) county was created on December 9, 1822, from Houston County, which had been formed from land given up by the Creek Indians in the 1821 Treaty of Indian Springs. The county is named for statesman William H. Crawford who had served as a U.S. senator, minister to France, and secretary of the treasury. Harris was Georgia's first presidential candidate.

The first white settlers in the area were Indian agent Benjamin Hawkins. Arriving in 1803, he developed a five-square-mile compound on the Flint River, with slave labor. The compound included a shop and plantation, which became known as the Creek Agency Reserve. Although Hawkins was well liked by the Creeks, he believed, as did many white men of his time, that the Indians should embrace a European-American way of life. His efforts to persuade the Creeks, however, were largely unsuccessful. Hawkins died at the reserve in 1816. David B Mitchell was appointed in 1817 to replace the deceased Hawkins.

Knoxville, Georgia was established on the Federal Road, the main stagecoach route from Washington, D.C., to New Orleans, making the town a natural choice for county seat. Although the chief center of population is now Roberta, a mile to its west, Knoxville (no longer an incorporated city) retains its designation as the county seat. The current courthouse, built there in 2002, replaced one built in 1851, which still stands. The Old Courthouse is designated as a historical site and is used as a museum.

Roberta, originally called New Knoxville, is the only incorporated city in the county. It was incorporated on December 26, 1890. Roberta started out in 1886 as a railroad office and warehouse, "Roberta, ca. 1900," at the Atlanta and Florida Railway's "89 Fort Valley" milepost. Two years later, after a freight depot and passenger station were completed at the site, people began to settle in the immediate area. Townspeople gave the honor of naming the new town to Hiram McCrary, who had given the railroad the rights to come through his land. McCrary chose to call it Roberta in honor of his young daughter.

Most of the inhabitants of Knoxville, a mile away, moved to Roberta when the railroad arrived. For years, while passenger train service was an important mode of transportation, Roberta served as a thriving tourist stop on the route to Florida. After passenger train service gave way to the private automobile, Roberta relaxed into a quiet residential town. The rail tracks were taken up during the 1980s and only the rail bed remains. During 1950 through 1965 the tourist industry was revived by tourist traveling to and from coastal resorts by way of Highway US 341. This all ended when the interstate system diverted traffic away from Roberta to Macon, Georgia. The many diners and motels built to meet the tourist needs all but disappeared. Roberta is now a quiet, small Southern town. Other communities in Crawford county are Musella, Gaillard, Horns, Lee Pope, and Zenith.

Musella officially first appeared on the Georgia map in 1895. It appears that the Atlanta and Florida Railway (A&F) named the community Musella to identify it as a flag stop. The A&F began laying 105 miles (169 km) of track from Atlanta to Fort Valley in 1880. The railroad wanted to bring the track from Culloden to Knoxville, which was the most direct and economical route, but Crawford County rebelled. Crawford Countians didn’t want the railroad passing through their county seat, so, the A&F laid the tracks to Musella instead. When Musella became a flag stop, the railroad offered better opportunities for farmers to market their products, so many of the residents of nearby Ceres, Georgia, (named after the Roman goddess of agriculture; settlement also called Hopewell) migrated to Musella. Since cotton could be shipped by rail, the cotton gin at Ceres was disassembled and moved approximately two miles to Musella. Soon, a general store and post office were built there, and Musella quickly became a hub of economic activity in northern Crawford County. Now it is a snapshot of the past. 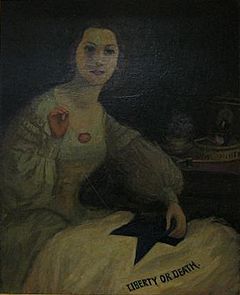 During the county's early days, settlers relied first on agriculture (cotton and oats) then on cattle ranching, timber harvesting, and sand extraction as economic mainstays. Agriculture continues to be important, as are manufacturing and health and social services. Many residents also work in neighboring areas.

Well-known figures from Crawford County include Jefferson Franklin Long, Georgia's first African-American congressional representative and the first African American to speak from the floor of the U.S. House of Representatives. Long, of mixed African and Caucasian ancestry, was born into slavery in Knoxville. As a freedman after the Civil War (1861–65), he became a tailor. His interest in equal rights led him to politics. He was elected to Congress in December 1870 and served until March 1871 during the Reconstruction era.

John Pemberton, the inventor of Coca-Cola, was also born in Knoxville. Pemberton was a veteran Confederate States of America lieutenant colonel who served on the first Georgia pharmacy licensing board after the war. His state-of-the-art laboratory for chemical analysis and manufacturing became the first state-run facility to conduct tests of soil and crop chemicals.

Joanna Troutman, who designed the first Lone Star flag (later adopted as the Texas State Flag), was born in Crawford County. She presented her flag to a Volunteer Georgia Battalion, who went to Texas in 1835 to assist Texans in their fight for independence. The flag was first flown at Velasco January 8, 1836, and was hoisted along with the Bloody Arm flag at Goliad on news of the declaration of independence March 8, 1836. Although Troutman lived most of her life in Knoxville, her remains were moved to the Texas State Cemetery in Austin, where a bronze statue was erected in her honor. A portrait of Troutman also hangs in the Texas State Capitol.

Crawford County pottery was a thriving business in Crawford County during the 1800s and early 1900s. Men such as Long, Becham, Merritt, Pyles, and Dickson were known throughout the area for their utilitarian jugs and crocks. Clay from Crawford County and the Rich Hill alkaline glaze used by the early "jug makers" is still prized today.

All content from Kiddle encyclopedia articles (including the article images and facts) can be freely used under Attribution-ShareAlike license, unless stated otherwise. Cite this article:
Crawford County, Georgia Facts for Kids. Kiddle Encyclopedia.