Bibb County is a county located in the U.S. state of Georgia. As of the 2010 census, the population was 155,547. On July 31, 2012, by a margin of 57% to 43%, voters in the county approved a measure to consolidate Bibb County with the county seat, Macon and dissolve the government of the only other incorporated municipality in the county, Payne City; however, Payne City was officially dissolved by Governor Nathan Deal on March 27, 2015.

Robert Reichert was the first mayor of Macon-Bibb, January 1, 2014.

Native Americans/Indians (mostly Cherokee) had inhabited the area, which would become Bibb County, for centuries. They were forcibly removed farther West, to Indian Territory, in what was known as the Indian Removal in the 1830s, under the administration of seventh President Andrew Jackson. The Cherokee refer to their removal as the "Trail of Tears."

Bibb is one of the counties included in what has been called the "Black Belt", referring to the fertile dark soil of the uplands. The land was initially developed by European Americans and African Americans for cotton plantations in the antebellum years. This commodity crop generated high incomes for planters as the market for cotton was strong in northern textile mills and England. A total of one million slaves were forcibly removed to the Deep South in the domestic slave trade for these developments. Their population was the majority in many counties and areas.

Bibb County was created by act of the State Legislature of Georgia on December 9, 1822, with Macon to be incorporated as a town/city in December 1823; designated the County Seat. It was carved from the earlier territories of the counties of Jones, Monroe, Houston, and Twiggs counties. The County Seat has never been changed since, and no other subsequent county in the state has ever been created ("erected") out of land from Bibb County.

The county was named for Dr. William Wyatt Bibb, a physician from Elbert County, who was elected to and served in the U.S. House of Representatives and United States Senate from History of Georgia, moved to the new Alabama Territory, before being elected as the first Governor of the new State of Alabama.

During the Civil War, 10% of the white men in the county died in the service of the Confederate States Army.

After white Democrats regained control of the state legislature, they passed laws to impose white supremacy and control freedmen. Under a new state constitution at the turn of century, the legislators disenfranchised most blacks and tens of thousands of poor whites in the state to reduce their political influence.

Macon mayor Robert Reichert became the first mayor of the consolidated city on January 1, 2014. He received 49% of the vote in the general election on September 17 over the other five mayoral candidates; however, winning the election outright required the winner to capture a majority of the vote. He subsequently won 63% of the vote in a runoff election against former Macon mayor C. Jack Ellis.

The population tables show a dramatic reduction in population growth from 1920 to 1940, less than half the amounts for censuses before and after these dates; during this period, tens of thousands of African Americans left the state for cities in the North and Midwest, as part of the Great Migration to escape the oppression of Jim Crow and lynchings, for better jobs, education and living conditions. Through such migration, they went from being mostly rural people to being more urbanized than the average in the United States, which has become a mostly suburban population in terms of where residences are located. 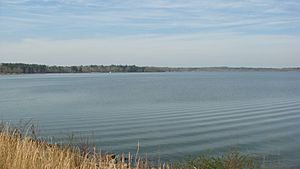 Lake Tobesofkee in the Wintertime

Lake Tobesofkee, about 10 miles (16 km) west of Macon, has three parks. Claystone, Sandy Beach, and Arrowhead Parks, each with a beach, and children's playgrounds. Sandy Beach has lighted tennis courts and a softball field.

All content from Kiddle encyclopedia articles (including the article images and facts) can be freely used under Attribution-ShareAlike license, unless stated otherwise. Cite this article:
Bibb County, Georgia Facts for Kids. Kiddle Encyclopedia.