Crossdale is a rural locality in the Somerset Region, Queensland, Australia. In the 2011 census, Crossdale had a population of 190 people. 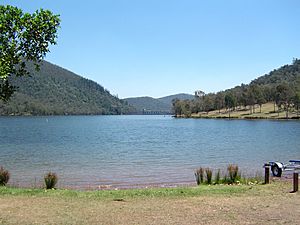 The vegetated slopes of Little Mount Brisbane (left of image)

Part of the western boundary of Crossdale follows the Stanley River. Some of the waters of Somerset Dam are within the locality. Crossdale is relatively large and has a diverse topography. In the north east the elevations rises along the north of the D'Aguilar Range. Little Mount Brisbane is located close to the Somerset Dam wall. In the south another hilly area reaches heights greater than 300 m around McKey Hill. A majority of the locality is devoid of vegetation although the slopes remain covered by bushland.

All content from Kiddle encyclopedia articles (including the article images and facts) can be freely used under Attribution-ShareAlike license, unless stated otherwise. Cite this article:
Crossdale, Queensland Facts for Kids. Kiddle Encyclopedia.