Culture of Florida facts for kids

The culture of Florida is similar to the rest of American Southern culture in its Northern and Central subregions, particularly around the Panhandle, but as a coastal state with multiple metro areas historically characterized by immigration, much of Florida's urban culture has been heavily influenced by immigrant populations, especially Caribbean, Latin American, Jewish, and European.

Modern-day Florida, from the second half of the 20th century through today, has been heavily influenced by the cultures of people moving in from foreign countries and other parts of the United States. The state's close proximity to the ocean influences many aspects of Florida culture and daily life. Being a part of the American South, Florida has also long been influenced by Southern culture. However, the culture in the southern half of Florida does not exhibit as much of the Southern culture that is found in North and Central Florida. The Miami area especially has been culturally influenced by Latin and Caribbean immigration. Characteristics such as a Southern accent still remain in North Florida, Central Florida, and sparsely in South Florida. Florida culture is also influenced by tourism, an important industry in the state. 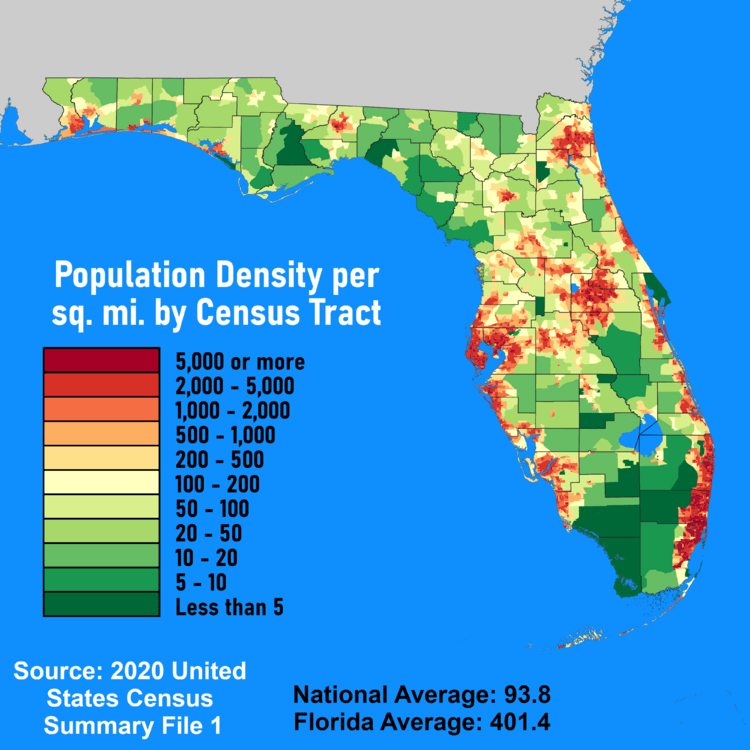 Florida is known for several unique foods including key lime pie and Floribbean cuisine. Citrus production is a major industry and citrus fruits are widely consumed.

As of 2005, 74.54 percent of Florida residents age 5 and older spoke English at home as a first language, while 18.65 percent spoke Spanish, and 1.73 percent of the population spoke French Creole (predominantly Haitian Creole). French was spoken by 0.63 percent, followed by German at 0.45 percent, and Portuguese at 0.44 percent of all residents. Also, Italian comprised 0.32 percent, while Tagalog made up 0.30 percent of speakers, Vietnamese was at 0.25 percent and Arabic at 0.23 percent. In all, 25.45 percent of Florida's population age 5 and older spoke a language other than English.

Florida's public education system identifies over 200 first languages other than English spoken in the homes of students. In 1990, the League of United Latin American Citizens (LULAC) won a class action lawsuit against the state Florida Department of Education that required educators to be trained in teaching English for Speakers of Other Languages (ESOL).

Florida is mostly Protestant, but Roman Catholicism is the single largest denomination in the state. There is also a sizable Jewish community, located mainly in South Florida. Florida's current religious affiliations are shown in the table below:

Florida's population increases annually more rapidly than that of most states. The main economic driver for Florida is tourism. Hotels, restaurants, leisure activities and other tourism-related activities are economically important. Many people from other states, especially Americans from the Northeast and Midwest, retire in Florida. This helps drive home construction, infrastructure expansion, as well as the banking and financial planning industries. Recreational and commercial fishing have been economically important in Florida for over a century.

Florida is also an important agricultural state, producing large amounts of vegetables, fruits, cattle, and dairy products. Light manufacturing has recently increased in Florida, and a number of companies have moved their headquarters to the state, attracted by lower taxes and less regulations.

All content from Kiddle encyclopedia articles (including the article images and facts) can be freely used under Attribution-ShareAlike license, unless stated otherwise. Cite this article:
Culture of Florida Facts for Kids. Kiddle Encyclopedia.